Born in Sweden, her grandparents were famous circus artists and her father is Adelaide based sculptor, Ted Jönsson. Marie immigrated to Australia with her family in 1972, and embarked on a highly successful career ‘diversion’ as an international model. Picking up on peripatetic life of her forebears she was to enjoy success as” Miss Summer Spain”,” South Australia Model of the Year” and “Australian Model of the Year”. However her rich artistic heritage soon exerted its primacy and she began painting while pregnant with her son.

Bringing immediate zest and life to the genre of Naïve or Naïf Art (sometimes also referred to as outsiders art, innocent art) she developed a unique painting approach wherein figures and objects are rendered in relief, giving the works a wonderful human and tactile quality. Marie’s art can best be described as Contemporary Naive Art.

Marie brings to her work a great sense of humor and keen observation of life, always presenting a positive and joyful experience often with a social comment about the human condition. Her paintings, prints and sculptures are for sale and are collected widely throughout Australia and internationally. Japan and USA has proved to be particularly appreciative and supportive markets for Marie and recently she has been making inroads into the European market.

Other highlights includes being asked to participate in the Henri Rousseau exhibition in Normandy France to mark the 100th anniversary of his death. She was featured in the acclaimed French Art magazine ARTension in a special edition on Naive art around the world (ARTension on L’Art naïf aujourd’hui). Marie was commissioned to paint the Olympic festivities; London2012 by Giclee Link, a UK publishing company and also saw her paintings made into duvet (quilt covers) by ARTnBED in New York and Israel. This year will be Marie’s third year of representing Australia in the annual Art Naive Festival in Katowice, Poland.

She has also got several public sculptures to her name, the largest creation spanning 44 meters across at the entrance of the mid north town of Balaklava called the Federation Gateway. This sculpture depicts a federation house with stories made from handmade ceramic and mosaic, telling some of the tales of the district over the last 100 years both in pictures and the written word on plaques.

Marie has won many Art Competitions and been the recipient of two SA Great awards for the Arts in 2002 and 2007. Her artworks are also featured in corporate collections, private collections and several art books worldwide. Her artwork is for sale to the general public including paintings, sculptures, giclee prints and more.

Come and join Marie on her ART BLOG where she tells the tales about what inspires an artist to paint everything from her circus roots in Sweden, former life as an international model, family in Australia and travel stories. This art blog is for those of you who like Art in general and share Marie’s quirky sense of humor, your comments are most welcome.

Also connect with Marie and other artists in all genres on her Facebook Page where you will find a daily quote to live by such as; “Life is short, eat dessert first”. 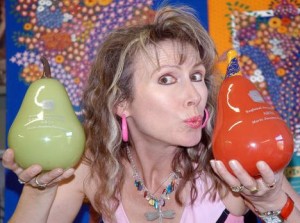 Who’s Who of Australian Women 2012

Who’s Who of Australian Women 2013

2014 Project Mapping (video mapping) on Swedish Embassy, Warsaw, Poland (featured in Polish Press and in the Metro and Buses )