THE ART OF HAVING A GOOD TIME

Oh the 1980’s – I remember it well, those Girls nights out.   Well some of it at least although I have to admit through a glass colored by gin and tonic or champagne.  Those were the days when I could party all night, sleep for an hour and still attend a fashion shoot the next day and look fresh faced and bushy tailed.  My girlfriends and I would hit all the clubs in town, know all the bouncers and never line up.  Our favorite clubs were Regines, Toucan & Toucan Two, Limbo and Jules.

Adelaide nightlife as captured on canvas!

This image is one third of a painting called “The true colors of Hindley Street” the whole one can be seen on this link; and is a Giclee print, the original acrylic painting was 25cm x 155cm and was bought by a Physiatrist  and hung in the waiting room.  It was very popular with the clients I’ve been told.

Hindley Street was the hub of the clubs and the place to go and hang out in the 70’s & 80’s and the painting was called Cracking a Hindley originally as that what we called driving very slowly up the street with all of the car occupants hanging out the windows and interacting with the goings on! 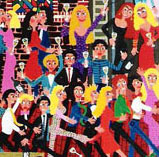 When I had the idea to do this painting I went around and photographed all the shops and businesses that were memorable for me.  I used my artistic licence to cut out some of the less colorful places as well as adding all I had seen over the years into the picture at the same time but apart from that it is pretty true to life.  Hindley street has changed a little since those days but it is still frequented by the night-owls, and trying to catch a cab there at 4am in the morning without queuing for ages is an impossibility as I recently found out. (Old habits die hard,lol!)

However in those days I would spend all night on the dance floor, dancing up a storm, the music pumping through my veins with just enough alcohol to lose the inhibitions.  That was the time when Michael Jackson was still black and cute and sang Thriller, Billie Jean & Beat it.  Kevin Rowland from Dexy’s Midnight Runner’s singing Come on Eileen, wearing nothing but blue jean overalls.  Who can forget Frank the owner of Toucan wearing suits without a shirt complete with gold necklaces!  The Eurythmics certainly had it right – Sweet Dreams are made of this and they were my Golden years.   The last song the DJ would spin on the turn table was U2’s; Still haven’t found what I am looking for!

But at that hour of the morning round about 4-5 am – what I would be looking for, was a snack and so would all the other clubbers too.  So off to Marcellina’s we’d trot, meeting up for a pizza with all the other die hards, some a little worse for wear!  Then tip toeing home, shoes in hand with the sun only to do it all again the next night.  Oh those were the days! 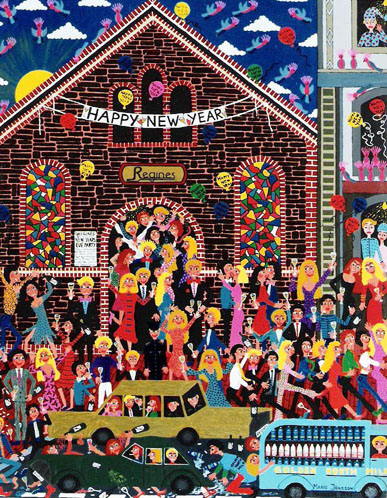 I can still party up a storm although these days it takes a little longer to recover and perhaps count my drinks a little more carefully unlike Dorothy Parker who said;

(if you enjoyed that use these links for another couple of party story art blogs   51. When Laughter is the best medicine mmm…. and maybe a little bit of snake 53. A Hens night out..without mentioning the P…word!..impossible )

Footnote:  This Artwork has now been made into a Duvet and is on sale at ARTnBED website

http://www.artnbed.com/ Here is another blog about how that all came about if you fancy a read 140 ART n BED