This painting “Antonis Tivoli” is one I painted for my father SCULPTOR Ted Jonsson and depicts him and his family, my grandparents.  They spent nearly all their lives travelling around Sweden and nearby countries with their side shows and entertainments which also had a dance venue with a live band. 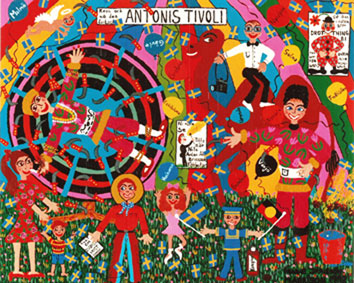 They usually travelled for 6 months during the warmer weather then came back to Stockholm where they spent the winter months doing repairs on the sideshows trucks and tents.

They had 5 children, 4 of whom joined the Tivoli, however my Dad was the youngest and he had to stay at home and go to school.  He would live in their large 2 story home all by himself from the age of around 10, for six months at a time.

My father describes this time as very scary and also very exciting as he got older.  His parents would leave him bags and bags full of coins (small change from the Tivoli) to use for food and whatever he needed. They also arranged for the local deli owner to give him credit.

Can you imagine nowadays leaving a child of 10 alone for half a year, however in those days things were different and when my grandparents were home they were great parents from what I can understand.

My dad would come home and check the whole house for ghosts and burglars with a large knife in his hand, walking from room to room.  His nutritional value count could well have been low lol, as he remembers eating a lot of cornflakes during those months.

My grandfather Anton joined the circus at the age of 16, working as an acrobat artist and did a high-wire act.  My grandmother Vera ran away from home at 15 (as I did when I was 14 but that’s another story) and she went out to sea, joined on as a kitchen hand.  They eventually met and ran away to join the circus, well made a circus in their case!

I love you daddy!

On this painting my grandmother is tied to a spinning wheel although that may be my artistic licence, what is true however is that she was blind folded and tied up and my grandfather also blind folded, would throw knives around her.  My father describes their marriage as a good one but very volatile and remembers many a time when they would have big fights just as their music would start up and their names were announced to go on stage.  He remembers holding his breath hoping that his mother would not get hurt.  She herself had no such qualms however knowing and trusting that Anton would keep her safe, such faith!!    (to be continued)

So I am very glad this next quote was said by Thomas Hart Benton (politician) and not my grandfather!

Hope you come back and visit me again, till then happy painting and sculpting everyone!

The continuation of this art blog here 21. Life in a Circus Tent