81 ART & The Reef and the Swimming Pool

Before we emigrated from Sweden to Australia my father promised my brother and me that when we get there we were allowed to have both a large swimming pool and a donkey!  Well I guess the perception of what life would be like in sunny Australia when you sit and dream about it from snow-covered Sweden can alter a bit, LOL. 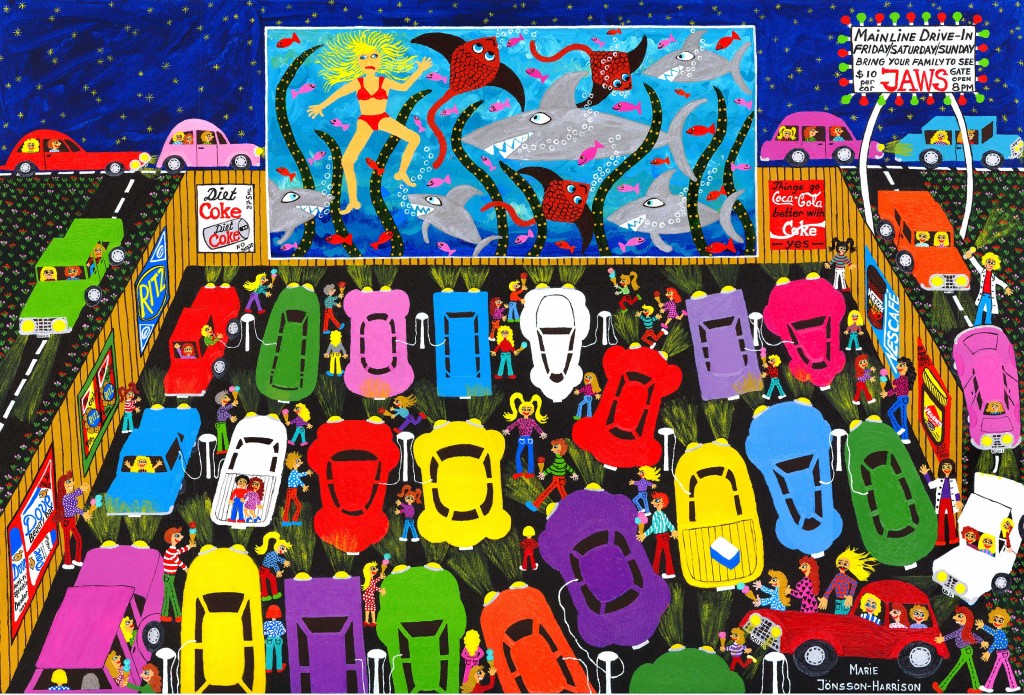 Giclee print At the Drive-in

We did not find any kangaroos hopping about the suburban streets, nor was it ever possible to have a donkey in the ½ an acre suburban house block, but my dad did come true with the big swimming pool.  Would you believe he actually dug the hole for it himself, there wasn’t much he couldn’t do my dad when it came to it.  Seemed to us like he was in the hole for months and digging all the way to China.

(I actually eventually got 2 donkeys when we lived at the farm, but that’s another story) 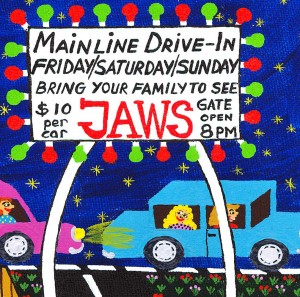 The pool was eventually finished and it was the most magnificent oasis away from the hotter than hot Australian weather and we enjoyed swimming night and day.

So the inspiration for this acrylic on canvas painting comes from a combination of our swimming pool and seeing the movie “Jaws” at the drive-in.  It’s called “At The Drive-in” (also available as a limited edition GICLEE PRINT)

Drive-in movies were something we did not have in Sweden and we all really loved going to them in Australia.  You would just pile into the car, it used to cost a few bucks for a carload of people, you’d hook up the speaker (although sometimes it took a while to find one that didn’t crackle) and you were set to go.

Of course you would make a trip to the canteen and buy those “sometimes foods” like Chico rolls and pop top ice creams and see lots of kids who already have their pajamas and dressing gowns on begging their parents for lollies and sweets. (The kids usually fall asleep before the end of the movie and would be easily transported straight to bed then.)

So it was on one of these nights that I went to see “Jaws” and lol that so spoiled my love for the water, so much so that it took quite a while before I would have any night swims in the pool.  Of course I knew it was illogical to think that a shark could be in the pool – but there still was that silly thought in the back of my mind!  I do love swimming still but never again had the devil may care attitude to the sea.  Perhaps that has been good anyway as there certainly have been quite a few shark attacks locally.

Which brings me to a wonderful new Australian movie called “The Reef” which I strongly recommend that you all go and see.  It is based on a true story which I remember reading about in the papers some years ago, about a group of friends who were to spend a week on a yacht whilst delivering it to a new buyer in Indonesia – when it all goes pear shaped and the yacht capsizes off the North Australian coast and the group have to decide whether to sink or swim!

I won’t tell you anymore details, so I don’t spoil the story for you – other than to say that the four of us that went to the movies forgot to breathe quite a few times and actually had to think about doing so, lucky for us the time just flew by, or we would have been out of oxygen!   The actors were great and you will recognize a couple from the Underbelly series such as Damian Walshe-Howling and Gyton Grantley and the movie was written and directed by by Andrew Traucki, who is an up and coming director to watch.

So here is a quote from Woody Allen which I think fits perfectly here;

“A relationship, I think is like a shark, you know?  It has to constantly move forward or it dies.  And I think what we got on our hands is a dead shark.”