Alf Traeger, “Wiring the shed to the farm house seemed a natural step to take for an inventive ten year old boy living on a farm opposite the Dalkey cemetery.  He never dreamed that these early tinkering would be so vital to a nation.  By 1927 Alf Traegar had invented the pedal wireless, enabling isolated outback Australians to communicate; making the flying Doctor a reality and educating thousands of youngsters through the School of the Air.” 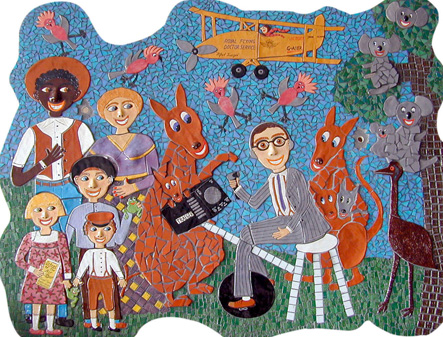 The above paragraph is what is written on a plaque next to this ceramic and mosaic panel which is part of the Centenary of Federation Gateway Sculpture situated in Balaklava, South Australia.  If you would like to recap and see & read more about this sculpture use these links for the art blogs; “Stories behind the Wall”. & “Volunteers our backbone “

According to Alf Traeger’s stepdaughter Glenda Shepherd who still lives in Balaklava where Alf grew up, after moving there from Victoria.  He was very interested from an early age in anything mechanical and surprised the whole family by building a telephone line from his house to a shed on the property some fifty meters away, at that time 1907 he was only twelve.  He had used a pitchfork as a magnet for the telephone, the diaphragms were the tops of tobacco tins and to make the microphone carbon granules he used pieces of charcoal from the stove.   Alf went on to do a mechanical & electrical engineering course and set up a small electrical business making generators and radio transmitters.  In 1925 Alf met Padre John Flynn who traveled extensively in the outback of Australia and his dream was to be able to bring medical help where ever it was needed.  His vision was a communication system that would be able to bring “Flying Doctors” to the outback.  So Alf started working on this idea and after thee years of experimenting Alf was able to produce the “Pedal Wireless”.

I was actually very fortunate to have tried out this contraption myself many years ago.  You see very close friends of ours Bill & Lorna Wilson who at one stage were the largest landowners in the Southern Hemisphere had the “Pedal Wireless” both at Frome Downs Station and Werocata in Balaklava.  The original one was battery driven but that proved costly and unreliable so therefore the pedals from a bicycle was added.  So you could sit on this contraption and peddle with the legs and the hands could tap out the message by Morse code.  Alf set up a “mother station” in Cloncurry and then installed 6 smaller “baby sets” in cattle stations and at Birdsville Hospital.  The first message was from Augustus Downs station some 300 km away but the “pedal wireless” could send and receive messages at least 800 km away.

As the Morse code was a bit tedious Alf designed a keyboard in 1931 and later it was replaced by voice.  Now the isolated people of the outback were able to reach out for help and receive a diagnosis to their ailments and immediate instruction in first aid if that was needed.

THE ART OF THE FLYING DOCTOR

From this initiative Alf was able to help John Flynn with the first Flying Doctor service called Aerial Medical Service which started in 1928 came into its own with the “pedal wireless” in 1929 and slowly found its feet.  Qantas supplied  them  with their first aircraft and in 1942 the service changed its name to the Flying Doctors Service, later on in 1955 added the Royal to the name; Royal Flying Doctors Service.

The “Pedal Wireless” also was instrumental in facilitating the long distance learning the kids of the outback enjoyed with School of the Air which started in 1951.  This meant that the school age children did not have to go away to boarding school but could be taught by teachers from far away.

So thank you very much Alfred Traeger, you did good!

So here is a quote I think fits well here by Georg Christoph Lichtenberg;

“Everyone is a genius at least once a year.  The real geniuses simply have their bright Ideas closer together”