171. ART and the ADVENTURE OF A LIFETIME DOCUMENTARY

I hope you sat glued to your televisions on Saturday at 4.30pm on Channel 7, to watch the Coast to Coast for Kids – Land & Sea Challenge.  Just don’t blink or you will miss the star in my life my hubby!  Lol

You see hubby was part of the support crew that went over to Kangaroo Island to film this adventure over a 5 day period recently when he took time of from being Art Manager to helping out where he could and being chief chef and bottle washer.

The aim of the television production is to raise money for charities and this time it was for the Women’s and Children’s Hospital Foundation.  The challenges had been dreamed up by their event manager Christina Angus who also participated in the event. Eleven participants all from South Australia were the “Challengers” who each raised over $10.000 dollars.   The man in charge is Troy Gray with his Vox ventures production company and Troy’s past 10 TV documentaries have screened internationally, won medals in the Annual South Australian Cinematography Awards as well as raised over $1 Million dollars for South Australian based charities.

The Art of painting Football

This football painting shows some of Troys other talents as he started out as a footy star who was drafted to the Sydney Swans in 1991 before being traded to St Kilda, then starting on his media and production career.  This is also pretty much how I found the Challengers when I joined in the festivities for the weekend on the Kangaroo Island shoot.  The boys were all kicking the footy around and as they are all pretty easy on the eye I certainly thought I had come to the right place!  As I am a firm believer in “Just because I’m on a diet, doesn’t mean I can’t look at the menu” Let’s just say I enjoyed the view!   Oh and the menfolk watching on Saturday TV Show won’t be disappointed either as the girls are pretty good sorts too.  Although I did not see any streakers as my artwork suggest but there was a nice incident with a pole dance or was it a shimmy up the pole to retrieve a ball – oh I forget!

THE ART OF THE CHALLENGE

The whole gang; David, Ali, Chad, Sam, Scott, Rebecca, Laura, Michaela, Saxon, Christina, Cara are thrown in the deep end for an unknown adventure through some of Kangaroo Island’s wonderful countryside.  Each participant went through their own personal challenges physically, mentally and emotionally as they faced five days of life-changing experiences.  It really was a tough gig as they all slept rough – sleeping bags or swags with sometimes just the one toilet to share between 20 odd people.  The fact that they were constantly filmed and expected to be ready with only minutes to spare added to the tension.  The days started at 5.30 am for breakfast round the campsite and often didn’t finish until way after midnight. 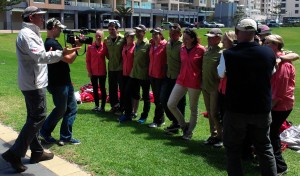 I was very happy to come for a little visit and be able to retreat to my comfy hotel room at the end of the night, I am more a “5 star kinda gal” however if I had the access to a Hollywood camper I would be up for the challenges as they looked like so much fun.  Full on activities from sunup till dawn such as; sailing, swimming with dolphins, hiking, bicycle riding, fishing, four wheel buggy driving, jet-skiing, melon catapulting, wine tasting, Harley Davidson rides just to mention a few.

THE ART OF KARAOKE

I do think I came over at the right time as it was Karaoke & Party night, unfortunately this event did not make it into the show but let me assure you it should have!  There were certainly some funny moments and unexpected talents, much hutzpa and bravado and just so much fun even from the local KI community who joined in as well.

THE ART OF THE VOLUNTEER

Over $110,000 was raised for the Neonatal Intensive Care Unit at the Women’s and Children’s Hospital which would not have been possible without the volunteers; Tim, the 2 Ben’s, Narelle, Bryan, as well as the hard work by Michelle and Martha and the girls in office of WCHF.  Of course we mustn’t forget Lisa & Butch and camera crew from 2OC Production (just try to figure out what those initials stand for and it will make you giggle!) who also worked incredibly hard and then had another episode to film in the outback when this one was in the bag. 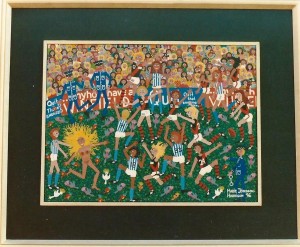 Here is a quote I think fits well by Vance Havner;

“The vision must be followed by the venture.  It is not enough to stare up the steps – we must step up the stairs.

Till next time happy painting, sculpting and adventuring!