As an artist you get inspiration from EVERYWHERE and in my case it really is from everywhere.   The busier the better as what some people have pointed out there seems to be a little of “Where is Wally” about my pictures. 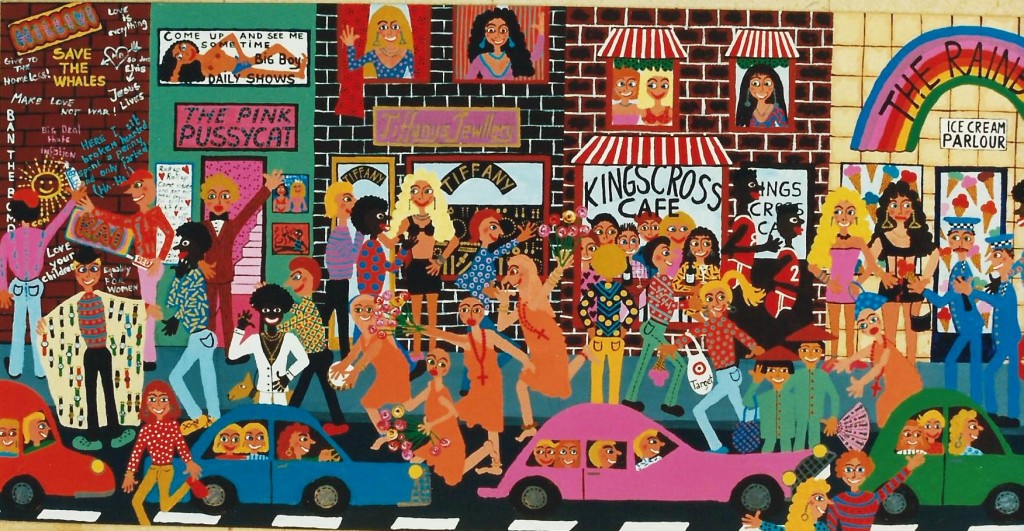 A night in Kings Cross

This painting of Kings Cross is also a long and skinny piece of streetscape and features the hustle and bustle of Kings Cross, everything from the “ladies of the night” the prostitutes and pimps, police, brothels and strip clubs, Tiffany Jewellery, cafes and ice cream parlours, graffiti artists (see if you can read the graffiti) and pickpocketers, basketballers, Rajneeshees (Orange people, remember that cult?).

The painting then continues on the other panel (which I will share another time) with Rastafarians (Bob Marley) Yes people from all cultures, Salvation Army playing the tambourine, Swedish and Chinese Massage venues, Pawnbrokers, fire breathers, thieves, girly reviews also among all that are we; my husband and the 2 kids as we went there together one night after we had been to a wedding in Sydney many years ago.

Our son was only 4 years old and daughter was a baby in arms and before you think that I was a dreadful mother introducing them to the seedier sides of the railwaytrack so to speak. Let me say in my defense that we only spent a short time there having a look, eating an ice cream and having a Chinese neck massage each on the footpath. I have always believed in taking the kids with us everywhere so they get a full education of life in all it’s forms. So that they have all the information and knowledge needed before they reach an opinion on different subjects which seems to have served them well!

Kings Cross is located 2 kilometres east of the Sydney centre and is known as The Cross which was the bohemian heartland and featured strongly in the Underbelly television series about the Australian drug and red-light capital of Australia. Most people that visit Sydney wander up there for a look to see how the other half lives. Among the strip clubs, topless waitresses and adult bookshops and nightclubs there are also trendy cafes and wonderful restaurants so it does have an interesting mix.

The illegal alcohol trade as featured in the Underbelly series was called sly grog and was infamous in The Cross led by the rival brothel owners Tilly Devine and Kate Leigh back in the day.

Lots of artists, including writers, poets and journalists also made their homes in the area such as Peter Finch, Chips Rafferty and Sir William Dobell. The American service men flocked there during their R&R and organized crime and police corruption was rife.

However at the same time it was also the home to The Wayside Chapel, run by Reverend Ted Noffs (now deceased)who ran a drop in centre and counselling service whereby the church was open most of the time to everyone. The Ted Noff Foundation continues his good work today, supporting young people and the not so young in their hour of need. 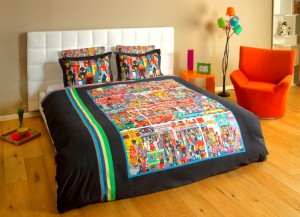 Those among you familiar with my work know that I painted the entertainment street in Adelaide, South Australia: Hindley Street which was later used by bedding company ARTnBED for a duvet.

Nadine Williams said in her article that this exciting quilt features all the one-time familiar icons of Hindley Street-Jules Bar, Downtown Leisure Centre, Flash Coffee Gelataria and Jerusalem Restaurant in a splash of vibrant street life. Crazy Horse nightclub is depicted alongside Goodwill Stores. And the instantly recognizable eclectic imagery is jammed with a multi-cultural crowd of people.