199 ARTnBED AND THE SECRET HISTORY OF: The Duvet

I just stumbled on an interesting fact as I was writing another art blog about my art being on duvet and quilts featuring the rather new crisp looking white Hindley Street set.

I was amazed that it seems to be a Swedish invention: my home country and here is a great article by Kate Watson-Smyth which was published in The Independent this week. 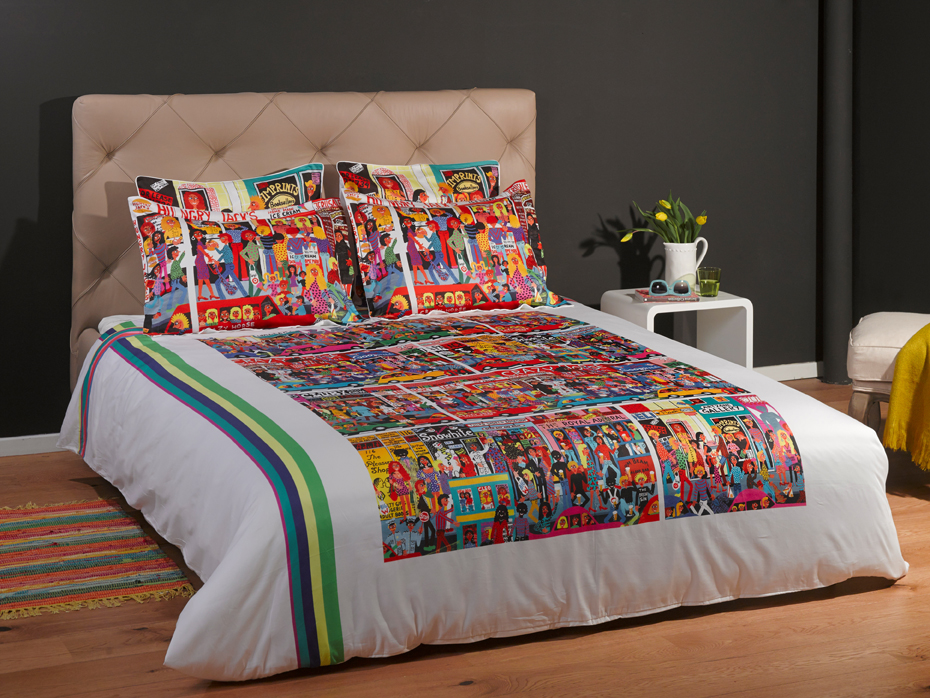 Sleeping on the Street, Hindley Street that is!

“It was the 1950s, before the halcyon days of the swinging Sixties. Sir Terence Conran was in Sweden. With a girl. And he found himself lying under a strange cover that was a bit like an eiderdown but with no sheets or blankets between him and it.

He enquired casually what it was and was informed that it was a Slumberdown quilt. A few years later, he would be the first person to sell duvets in Britain in his new shop on the King’s Road in west London.

Habitat opened on 11 May 1964. It was selling a lifestyle and stocked new and interesting homewares – the chicken brick, the wok and, of course, the duvet. When the catalogue was launched in 1966, it became a coffee-table book in its own right and the store expanded rapidly throughout the country.

Sir Terence recalls: “People do credit me with bringing the duvet to Britain. I had been in Sweden in the 1950s and was given a duvet to sleep under. I probably had a girl with me and I thought this was all part of the mood of the time – liberated sex and easy living. It was wonderful that when you came to make your bed, it was just a couple of shakes.”

You have to admit that it was rather sweet that after his liberated sex, he even bothered to think about making the bed. Anyway, the continental quilt, as it was more usually known until the mid-1970s, wasn’t an instant best-seller. James Greig, the assistant producer of If Walls Could Talk, an intimate history of the home (to be shown on BBC 4 later this year), says: “When they first came out, people were very reluctant to give up their sheets and blankets, which might have been wedding presents. But the duvet was really pioneered by the housewives who loved the idea that it was so quick to make the bed. Habitat even had an advertising slogan: ‘the 10-second bed’. I think they had a few in some stores to see how they went and the advertising tended to include a series of illustrative pictures so people could see how they worked.”

Greig has been unable to pinpoint the very first appearance of the duvet, but says it was used mainly in Scandinavia and the colder alpine countries.

To start with, Habitat sold more single duvets than doubles as they were initially regarded as something that was good for children. But gradually they became accepted by everyone. Today, it’s practically impossible to find anyone who sleeps under blankets any more.” 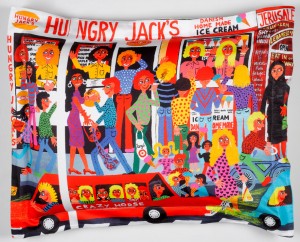 I of course remember growing up in Sweden and sleeping under a quilt cover (duvet) so it makes me extra happy and proud to be having my art shown in this way by ARTnBED.  Just to make the connection a little more amazing for me was that the name duvet is what they were originally called in Australia (the country I know live in) now for the most part in Australia we refer to them as a Doona and the cover a Quilt cover.  Here are a few more links to see the other blogs and pictures of the bedding available.  I hope you like it. 140 ART n BED and 188. ARTnBED and the painting Pottering at the Port and here is ARTnBED website where all their artists and bedding products can be viewed.

Happy painting and sculpting to you all.