This week the people of Sweden and Swedish living abroad will celebrate Lucia and the celebration will look very similar to this painting with Santa Lucia arriving with candles alight in her hair.  More about the Swedish tradition later but first I want to share with you some exciting news. 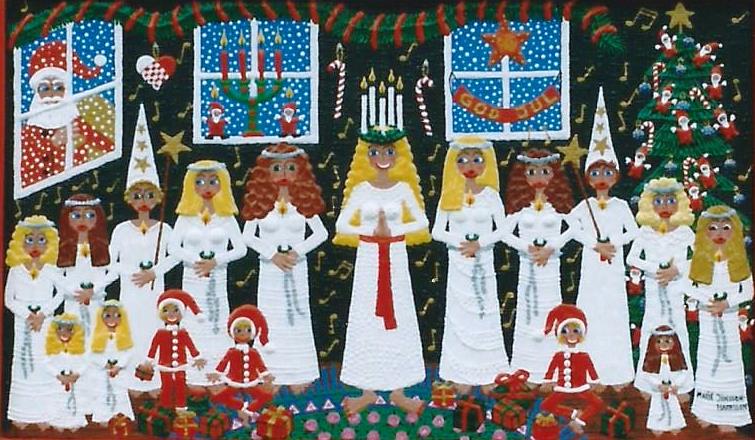 Bringing light on a cold night

I had a lovely email a few weeks ago from Błażej Krajczewski in Poland who had come across this painting of mine above.  At first I thought he may have been familiar with my work and naive art through the Art Naif Festival in Katowice, Poland where I have been exhibiting for the last 3 years but as it turns out he had just found my image on the internet somewhere.

In any case he had been commissioned to make an animation to celebrate Lucia and Christmas which will be shown on the facade of the historic building; the Embassy of Sweden in Warsaw Poland, at the entrance of the Royal Baths this weekend. 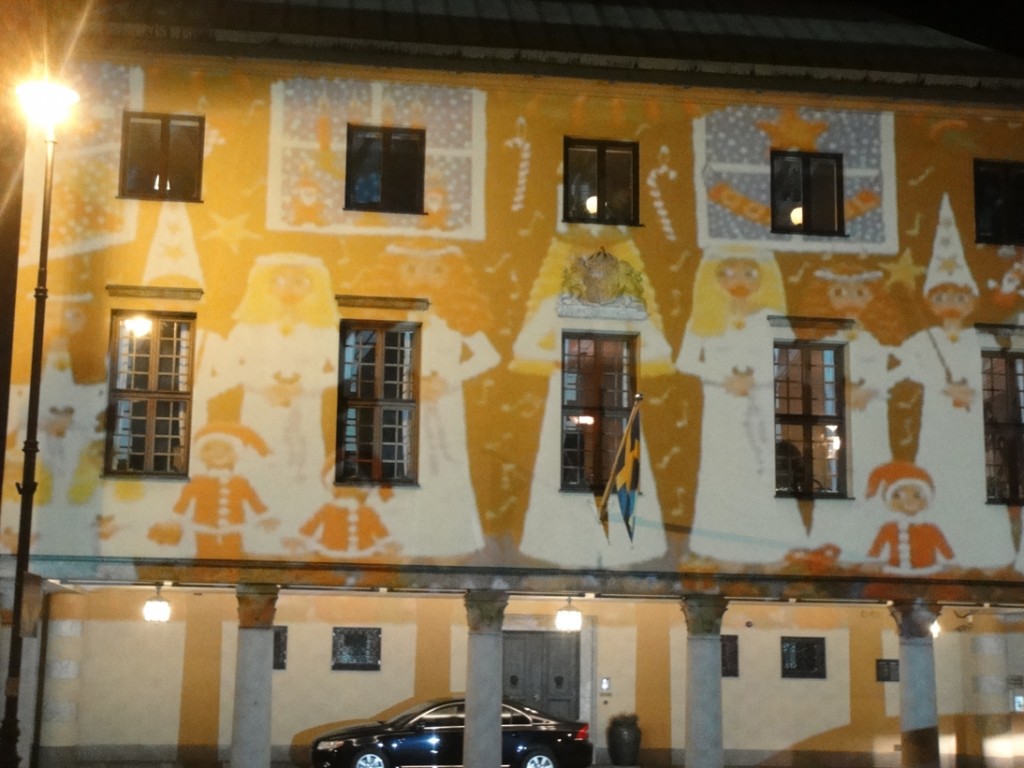 Projection mapping animation on the Swedish Embassy in Warsaw

This will be done by something called Projection Mapping (video mapping) formerly known as spatial augmented reality.  By using special software photos, films, paintings, animations are then projected onto buildings and the images can fit onto any size of industrial landscape.  It is often combined by sound to create an audio-visual narrative and in this case the music is all Swedish Christmas Carols and Lucia songs. 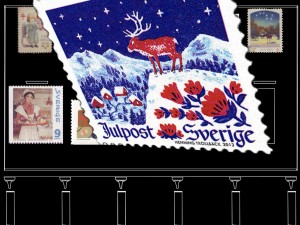 Projection mapping with a Swedish theme in Warsaw

Projection mapping is rather new however the history goes back to Disney and 1969 when Disneyland’s Haunted Mansion ride used 16mm film and projected fake disembodied heads to make them look real through optical illusions.  Later on artists and advertisers started to catch on to this idea and were greatly helped by Microsoft and their technological advancements. 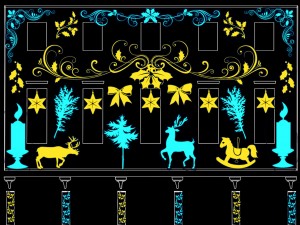 So I am so excited to have this painting brought to life by animation and really wish that I was in Warsaw this weekend to see the festivities in real life, to have my work shown in this beautiful European city on a cold and snow covered landscape projected across the whole building for all to see would be a treat.  Blazej has promised to film the event and I hope to be able to share this with you on Youtube eventually.

If you would like to know a bit more about the Swedish Lucia Traditions and how my family celebrated it here is a link 113 Art & Swedish Traditions, Another weird one

Another version of the Lucia tradition is according to folk tales the nights of the 12 and 13 December were the longest and darkest nights of the year and very dangerous as the animals spoke with a human voice and had supernatural powers.  So it was recommended for the people not to go to bed. 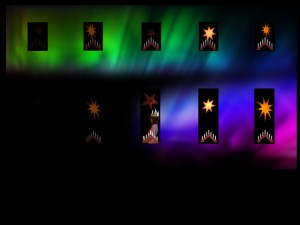 Light show on the building facade

Luckily then arriving was Lucia the girl dressed all in white with bright burning candles on a wreath in her hair bringing light to brighten the terrifying darkness.  She would lead the procession dressed in a long white gown and have a bright red sash around her waist and of course the wreath with candles all alight in her hair.  ST Lucia was followed by Tarnor, who would also be wearing white although their wreath was somewhat smaller and made out of silver tinsel.  Not to be outdone the boys would also join in, some dressed in the long white gown too with a long white pointed hat (LOL actually the hat would look like one of those dunce hats you wear in the naughty corner) although it was decorated with stars and the boys were called sjarngossar – starboys!  All carrying a burning candle in their hands.  A couple of boys would also be Santa’s little helpers dressed in red. 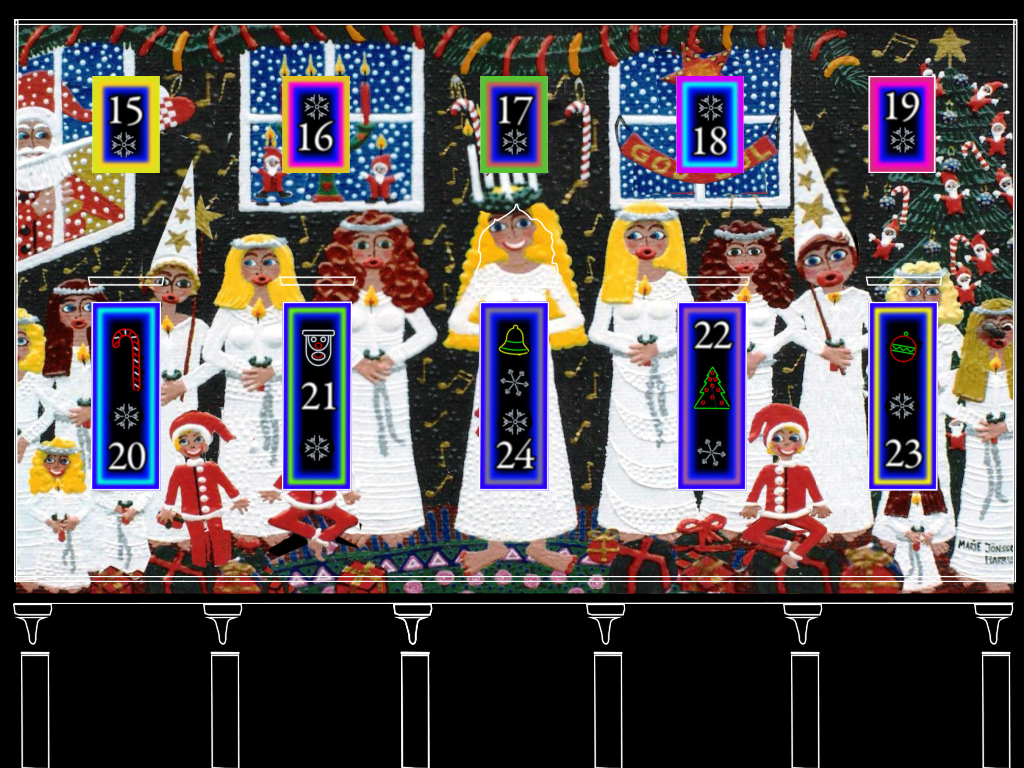 Lucia painting animation as a advents calender for Christmas

These days the processions with St Lucia visits every workplace and school with the celebrations starting early in the morning and celebrated with traditional cakes, biscuits and coffee.

So if you are in Warsaw this weekend come along enjoy the festivities and eat some gingerbread at the Swedish Embassy too.

Here is a quote by Edith Wharton which I think fits well here;

“There are two ways of spreading light; to be the candle or the mirror that reflects it. “

Till next time happy painting, sculpting and projection mapping to you all.