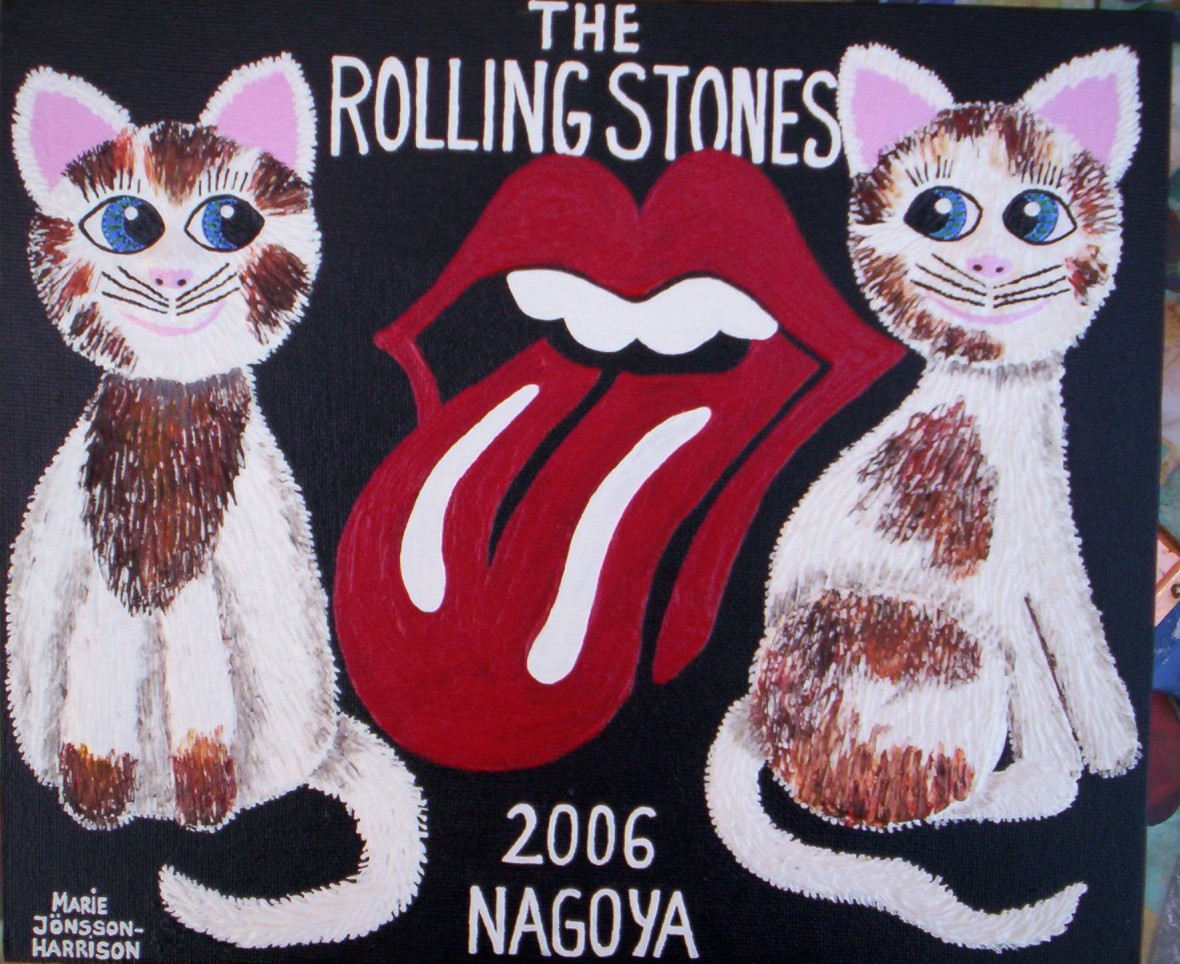 216 The ART of The Rolling Stones

This week was going to be the one where we finally got to see the Rolling Stones live! Ever since I remember I have loved the Stones, the bad boys of “sex, drugs and rocking roll”.  Well that is before they finally grew up a couple of years ago and decided to kick the bad habits and got healthy.  This  painting was one I did for one of my Japanese art exhibitions in Nagoya and sold to a keen Rolling Stones fan.  The distinctive Rolling Stones big lips logo was designed by John Pasche, was introduced in 1971 and as my naive art exhibition was primarily Cats and Dogs for this show I added some cats to the homage. 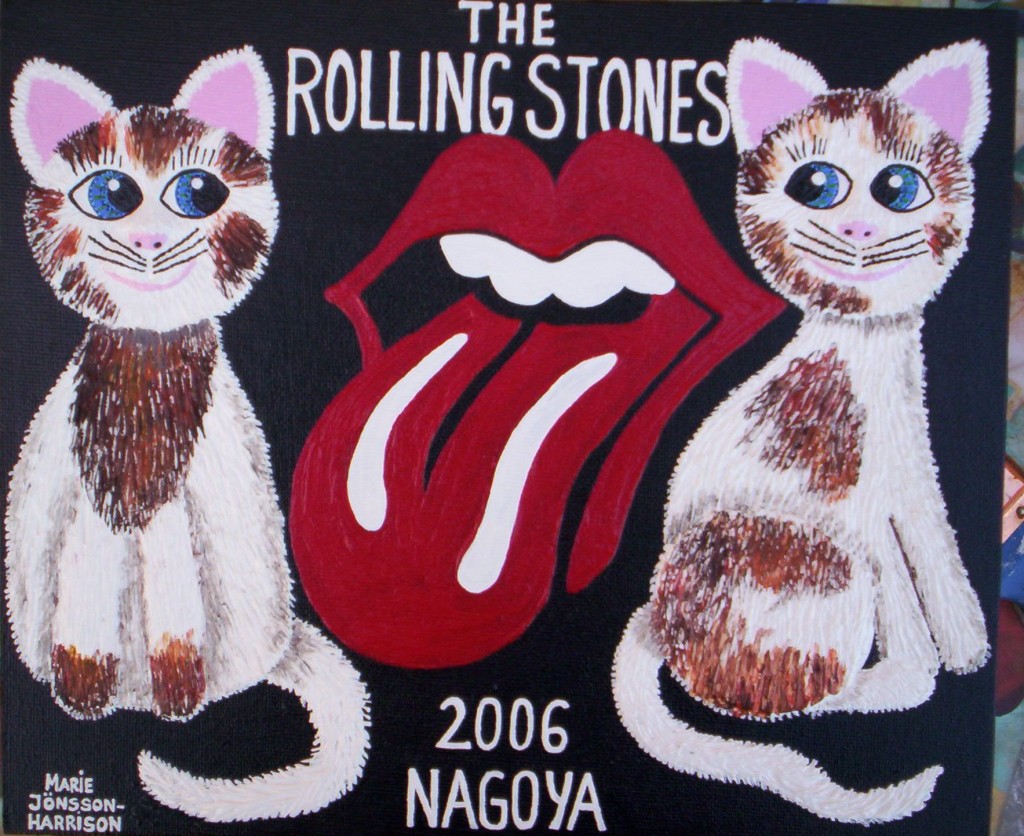 My homage to the Rolling Stones

The tickets for the Adelaide concert sold out in minutes and it was just through pure luck that we got some by trawling through the ticket site where only single seats were available.  One seat here and one seat there however we were not to be outdone and had 2 computers set up where we opened page after page looking for 2 tickets in the same area.  And when you are looking at some 50.000 seats in areas numbered from 100 – 500 and then alphabetic rows that is not an easy task.

Well as luck would have it finally we struck gold well figuratively speaking and managed to get 2 seats immediately in front of each other, so we can technically still hold hands lol

We also purchased at a fundraising dinner the framed Rolling Stones vinyl record and photograph plaque set to commemorate the concert in Adelaide.  Underneath that hangs my grandparents poster for their tivoli and if you want to find out more about that here are a couple of  art blogs; 20. Antonis Tivoli Art and 21. Life in a Circus Tent 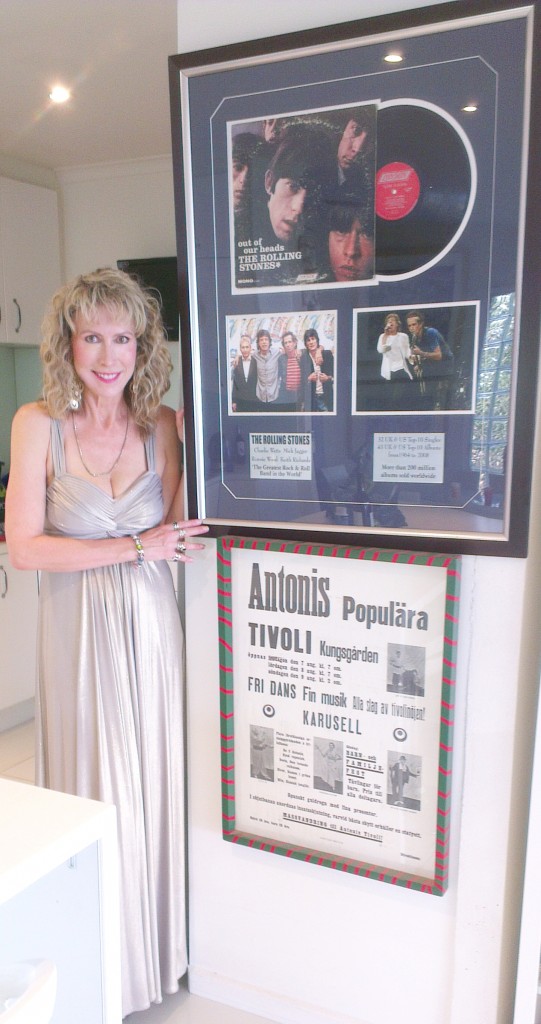 Well that was until the sad news of Mick Jagger’s girlfriend fashion designer L’Wren Scott which has put the concert on hold for now.  As disappointed as we are I am sure everyone understands and empathizes with Mick, such devastating news for anyone to deal with.  We are hopeful that the Rolling Stones will announce another date later in the year.

The Stones formed in England in 1962 and were noted for their long hair and a blues feel to their rock and roll also an air of cutting edge and rebelliousness than that other famous and fabulous band of the same era -The Beatles.

They were inducted into the Rock and Roll Hall of Fame in 1989 and are on everyone’s list of the Greatest Artists of All Time with estimated album sales of more than 250 million dollars.  The Rolling Stones celebrated their 50th anniversary in 2012 and last year embarked on a series of concerts in the UK.

Whilst I think every one of the stones songs are great my personal favorites are the following; Miss you, Beast of Burden, Can’t get no satisfaction, If you start me up, Emotional rescue, Waiting on a friend, Let’s spend the night together and You can’t always get what you want.

So here is a quote by the Rolling Stones I think fits perfectly here;

Till next time happy painting, sculpting and listening to music.