Like millions of women across the globe I have been reading Fifty shades of Grey and just finished the first book in the trilogy (Fifty shades of Darker and Fifty shades of Freed).   I had actually had the book in my possession for about 3 months without reading it.  The reason was that I am much more of a biography type of girl and like to read what real people are doing and usually get a tad bored with fiction when I know it is not actually based on a true story.  I must admit I did read the first couple of chapters early on but found it boring and skipped through to some of the “good bits”.

However when I recently caught up with a girlfriend who is in her mid sixties, an ex librarian and very well read, who said that she actually enjoyed the book and was amazed at how the author could write the sex scenes with such fevor and variety, my interest was sparked again.  Furthermore she said her own daughter who is in her late 20’s read the 3 books over one weekend, which peaked my interest even more. 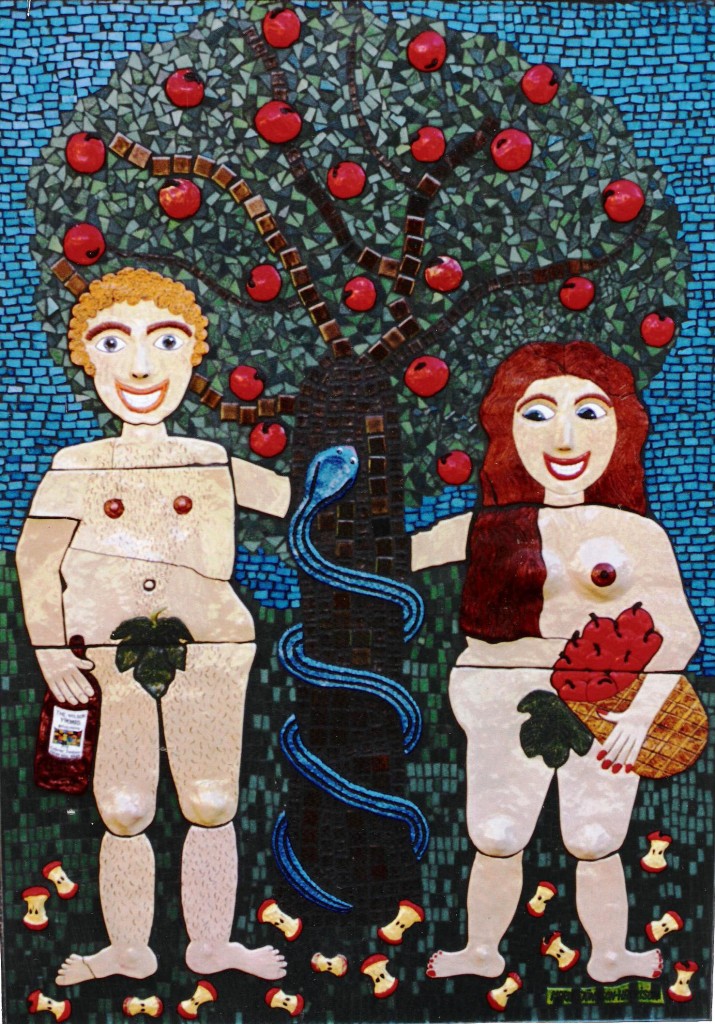 Apple juice may be fine but we rather have a wine!

As you can see by this wall based sculpture “Adam and Eve” or the alternative title “Apple juice may be fine but I rather have some wine” (handmade ceramic and mosaic artwork) I always like exploring the theme of sexuality and you may also like to read these 14. Adam & Steve 2 Sculpture and 35. The First Adam and Steve Artwork

What is it with this book, Fifty Shades of Grey that crosses the generations and makes millions of women across the globe, yummy mummies, singles, married, rich, poor get all hot and heavy as they read about Christian Grey and Anastasia’s escapades?

Exploring this thought brought me back to thinking about the cavemen days, how did it work then? Did the caveman just drag the women by the hair into a bush or a cave and had his way with her.  Is there something in our DNA that still lingers on and makes us a “little” submissive?

I say a “little” submissive as the above scenario would be totally abhorrent if the caveman was a “sweaty one toothed Oaf” and the encounter was rape instead of a mutual attraction.

I think that is the key isn’t it, there has to be that spark of electricity that you can feel in the air when your eyes meet and sex is the foremost thing on your mind.

Not that the couple in my Caveman acrylic on canvas board painting would have much privacy to get hot and heavy with all those children running around, but they must have found the time I figure! 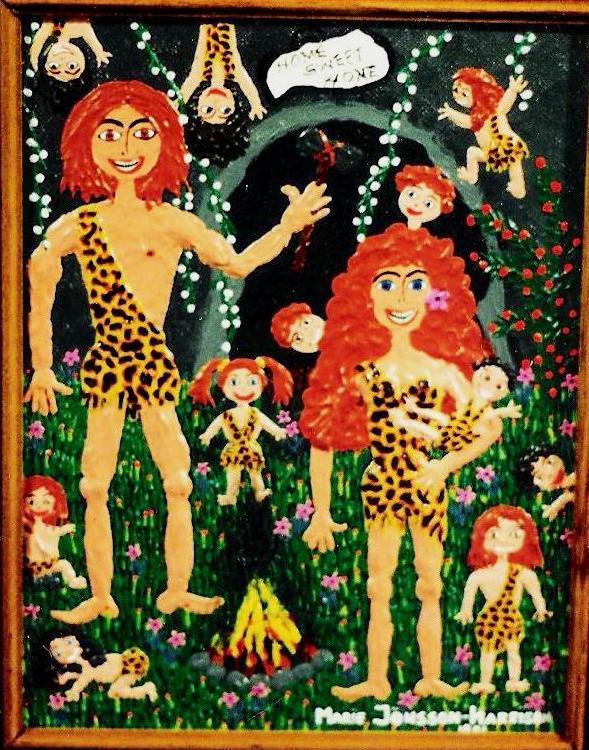 “I generally avoid temptation unless I can't resist it.” ― Mae West

It has been very interesting listening to the discussions around this book both in the media and also with friends.  One male friend who has not actually read the book is totally perplexed as he thinks all his perceptions of women and women’s lib has totally fallen by the wayside with the topic of S & M of Fifty shades of Grey.  However I was trying to tell him that after reading it I think he has totally missed the point – a point you only understand if you do read it.  For myself the thought of the Red room of Pain with some weird guy dressed like Hannibal Lecter would make me run for the hills (if I was able) and perhaps that is the idea some people that haven’t read the book think it is all about.   On the other hand if we are talking silk scarves or ties and there is trust and a strong mutual attraction, then that’s another thing, right? Personally I also really liked Anastasia’s feistiness and the clever use of words in their email banter.

THE ART OF CHOICE

Well E.L. James must have hit on a collective nerve.  Perhaps it is that in this day and age when we women for the most part are strong and independent.  We have the choices to live our lives the way that we want, have casual encounters, marry or not, travel the world, stay home with children or work.  Maybe even so, far down in our DNA we also have a need for the man to take charge.  Perhaps not all the time but there is something extremely sexual about giving over your control and not being in charge at least in the bedroom.   Also I think women enjoy the erotic mystery of the written word where as men are more visual creatures and like seeing (the old lights on lights off debate)the sexual act and are more turned on by pornography than women as a rule.

AGEING & THE ART OF SEX

Which brings me to a great article a girlfriend of mine Nadine Williams has written called “Brown’s long magazine life “Sex-cess” on her website, which is a must read.  Helen Gurley Brown recently died at the ripe old age of 90, she was a trail blazer and as Nadine says “her magazine mantra metamorphosed the sex lives of the modern woman.     The author of the 1962 best-seller Sex and the Single Girl reckoned if women weren’t sex objects, they were in trouble and while good girls went to heaven, bad girls got to go everywhere.”    I have always loved that quote as well as everything else that ever came out of Mae West’s mouth – another trail blazer for the modern woman.  If you fancy a read of my Art blog on Mae and see the Mae West painting here is a link 72. Mae West “Come up and see me some time” & Art

“My own philosophy is if you’re not having sex, you’re finished.  It separates the girls from the old people”

And for what it is worth – I think she has a point, a good point!

I always sign off with Happy painting and sculpting, however this time I will also borrow from the movie with the music of the fabulous group ABBA called Mamma Mia and say Happy ….

Ps  I would really love to hear what your thoughts on the subject are so make a comment!