Today I am continuing the travel and art blog about our adventures in Europe during 2012 and if you would like to recap of what has happened up to this point here are some links with lots of artworks too of course;  156. ART & FREQUENT FLYER POINTS and 157. Art & Never judge a book by it’s cover and 155 The Art of Packing Light

This acrylic on canvas board painting shows the typical red and white timber cottage in Sweden although I have painted a very small house “stuga” here of course. 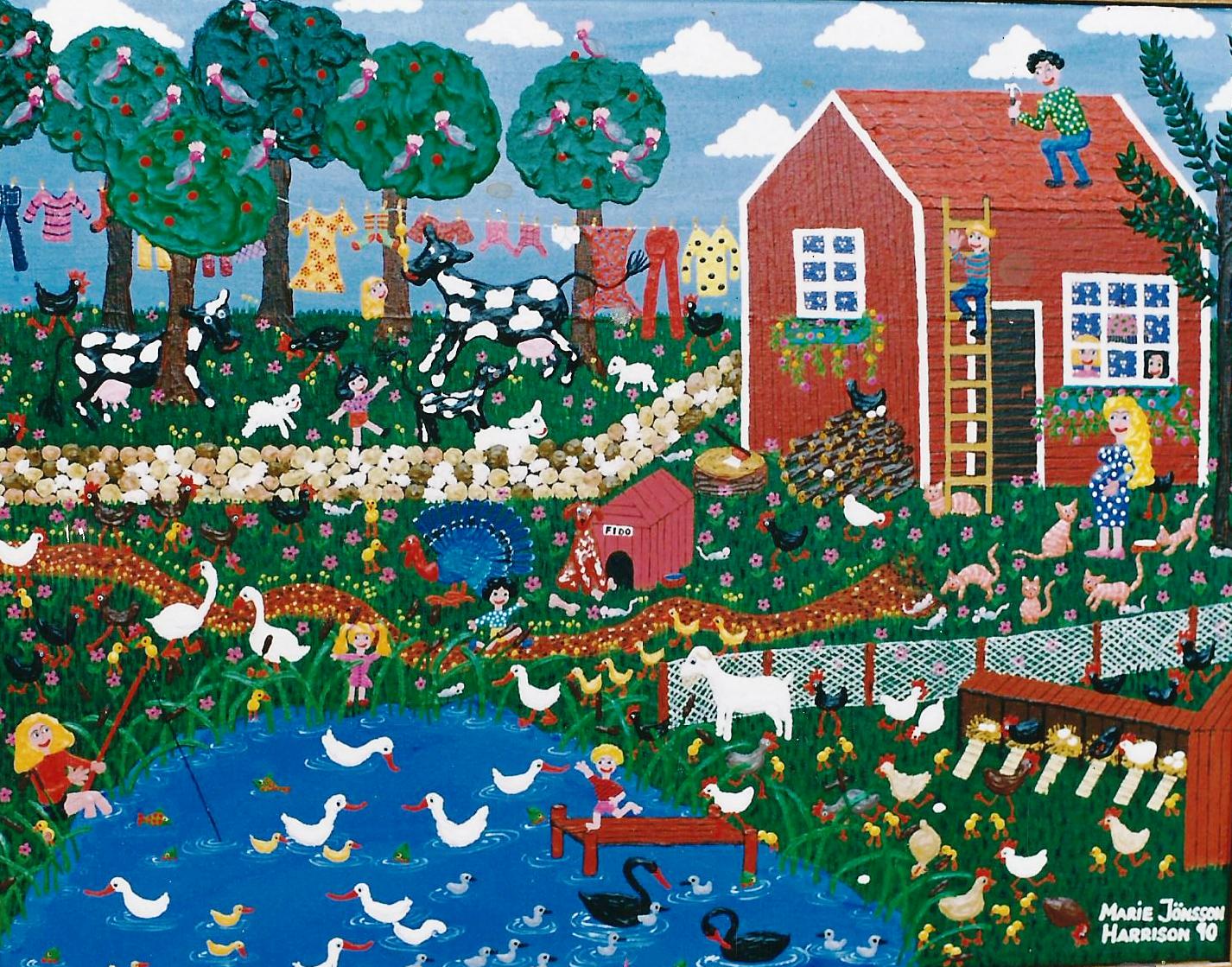 We loved our stay in Gothenburg and now we were catching the train for the 7 hour journey north to Sundsvall to visit my cousin Kent and his lovely wife Karin.  But of course there is a call of nature to be done before we get on the train so I go for a quick visit to the ladies at Gothenburg train station.

I opened the door into a small walkway and then tried to open the next one when I heard a cough and a stern voice call out to me, sitting behind some glass in the corner was a very grumpy man demanding money to enter, and he was sort of hidden behind the door.  Coming from Australia where all the public conveniences are both plentiful and FREE the Swedish public conveniences was a shock to the system.

Anyway in I go and as I am washing my hands with another 5 or 6 ladies in walks this old woman in her 80’s and lo and behold – suddenly another door opens and in sweeps this grumpy man in amongst the rest of us women in the “ladies only” toilet and belittles this poor woman for not paying.  She just like me had probably not seen him on her way in and was not trying to get a free pee, although the way he was acting it was more like she stole the queens silver!

The toilet visits in Sweden seemed rather expensive I thought and just to make it a bit more unpleasant as I later found out most of them are also unisex.   Which means that at Stockholm’s Central for example where there are some 30 or so toilets you stand with a huge mixed group of people waiting, something I wasn’t a fan of and then to be ushered into the loo where a strange man with a newspaper under his arm just vacated.  Never mind having strangers of the opposite sex staring at you when you retouch your make up, something I found very unsettling.   I think some of them didn’t really need to go to the toilet but were just in there to have perve!  (My apologies to the lovely men I do know read this who would not behave in this way I know, I am just talking about a few bad apples!) Although these type of moments for an artist provides great inspirations for paintings and sculpture though so you gotta look on the bright side!

LOL, I digress and that’s enough about toilets, anyway we now find ourselves 395km north of Stockholm in Sundsvall, a picturesque town with a population of 50 thousand plus another 45 thousand in the surrounding areas.

The city has quite a history as it has burned down and been rebuilt four times.  In 1721 it was set on fire by the Russian Army in what was called the Great Northern War.  The last time was in 1888 when they think the fire was caused by a spark from a steamship, this fire was the largest in Sweden’s history and the town this time was rebuilt out of stone and nicknamed “The Stone City”.

However my cousin Kent lives in a traditional 2 storey timber Swedish house, but instead of it being painted red and white it is blue.  Their house is a few kilometers away from the so called city of Sundsvall and about 5 minutes walking distance from both the forest and the water’s edge in an idyllic setting.

THE ART OF A GREAT COOK

Kent picked us up at the station, whilst Karin had gone all out bathing the whole house in candle lights and cooking up an amazing 3 course feast, starting off with a to die for Kantarell soup (a yellow Swedish mushroom that grows in the forest) and is my absolute favourite mushroom!  Karin is a wonderful cook and lucky or unlucky for us we only had 3 days with them otherwise I think I would have put on some serious weight!  Of course just like in Gothenburg we were spoiled rotten with wonderful sleeping quarters, we had the whole top floor to ourselves and food galore.  We also visited their children and their partners and the feasts just continued.  My hubby also tried elk for the first time which he enjoyed; the elk had been hunted in the forest by our host’s father.  Being a vegetarian myself I found it hard not to think about the poor elk, but tried to comfort myself with the thought that at least he enjoyed a free life in the forest unlike all the cows, calves and pigs etc, that are penned and killed for human consumption every day.

I again felt so well loved and connected to my relatives and my Swedish roots and kept on talking Swedish all the time much to hubbys annoyance, but he coped very well considering.

So here is a quote about languages which I thought fitted well here by Franklin P. Jones; 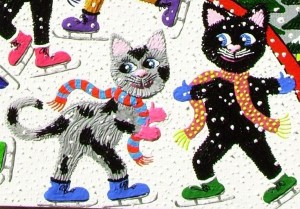 “It’s a strange world of language in which skating on thin ice can get you into hot water”.

Till next time happy Painting and Sculpting and travelling to you all!

Footnote;  Special Congratulations to the little baby boy born today up in Sundsvall to Asa & Tobias, a little brother to Anton, nephew to Kristoffer & Annikki and long awaited grandchild to Kent and Karin.