179 ART AND CHAINED TO THE RAIL WAY TRACK

PAINTING IN THE STUDIO

Oh boy what strange 6 weeks I have just had!!  Life happens to you whilst you are busy doing other things as John Lennon said.  Normally I sit in my art studio with an amazing view, the house perched up high like an eagles nest, high above a train track and overlooking a valley, beach and sea as far as the eye can see going all the way to the horizon.

Really wonderfully inspiring for an artist and probably why a lot of my paintings lately have been aquatic scenes.  Well our wonderful world was interrupted a couple of months ago with the Transport Departments electrification of the railway line.  Not something we had anticipated would bother us too much, we had seen the artist’s impressions and they looked just fine.  A couple of poles 50 meters apart and a few wires – not much to whinge about and you cannot stand against progress. 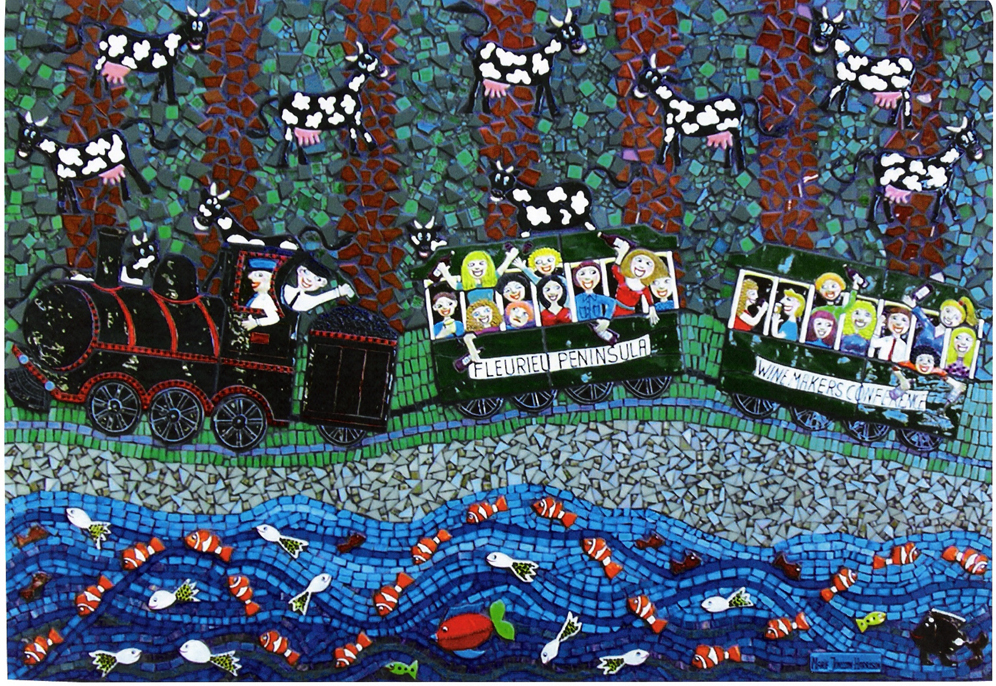 So the drilling started and then surprise, surprise they struck rock (we live on a mountain DOH! Why they didn’t anticipate that is beyond me.)   The drilling went on and on for weeks, day after day, 3 days drilling in every one of the 9 holes outside us, 7am – 5pm seven days a week.

Well to cut a long story short, painting happy paintings is impossible with over 83 decibels of incessant drilling 15 meters from your doorstep.  As is just living life and apart from tearing our hair out to add to the drama now my husband and I were fighting too.  So hubby got that fed up and cross he went out and told the workers off and that is when we found out what was actually happening on our street. 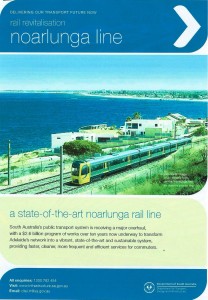 The South Australian Labor Government has a greater imagination than me!

5 MONKEYS WITH A COMPASS COULD HAVE DONE A BETTER JOB.

Our street one of the most scenic streets in Adelaide had been selected for special treatment, not poles 50 meters apart for us.  No the “so called experienced” (cough, cough) engineers from Halcrow designed this by Google map from Queensland with no visual consideration as to where these structures would be best placed from an environmental and aesthetics stance.  Instead the Tensioner Hubs (overlaps) has been placed more like a game of “Pin the Tail on the Donkey” with an astounding haphazard lack of forethought.

STATE OF THE ART 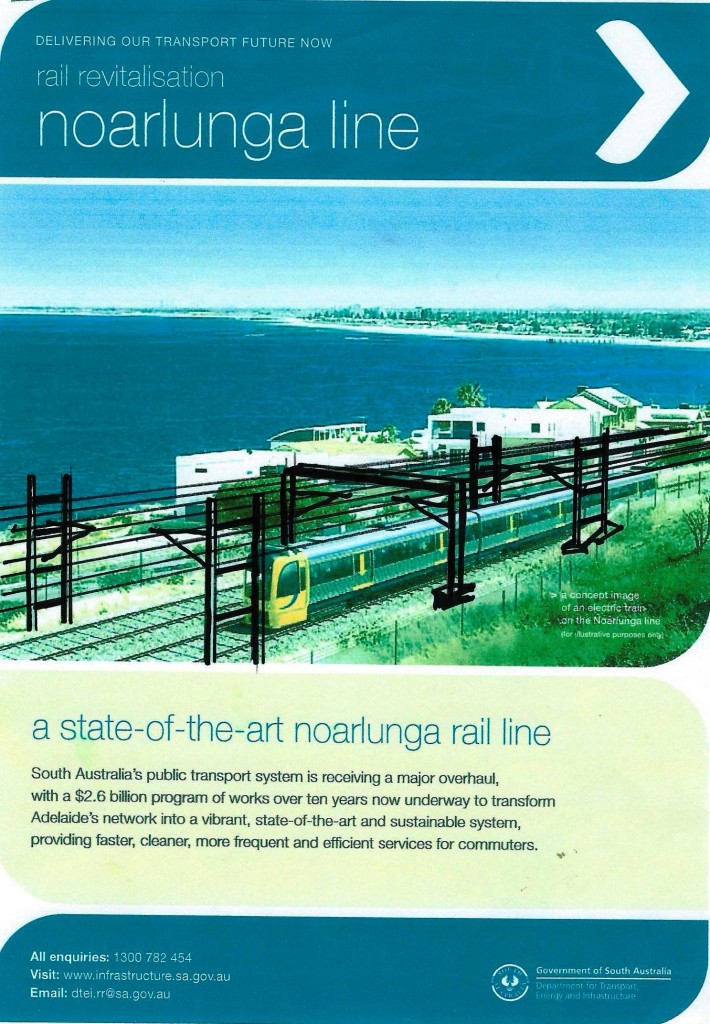 Minister Chloe said "The poles themselves would be visible from their homes, but only if you really tried to see them!

I would like to point out though that it is not the POLES that we object too, we are well aware that we would have poles all the way along the railway line for the wire to sit on with this old and antiquated system.   The South Australian Government who is clearly misinformed call this a “State of the Art” design (LOL) perhaps they should have done a little bit of Googeling themselves.  It is not too hard to find out that the Noarlunga/Seaford Rail Electrification was actually first designed in Hungary before World War ll and trialed back in the 40’s before it came into widespread use in the 1950.  So the statement ”State of the Art” is terribly misleading as there are multiple much better designs available across the world this Century.

THE ART OF THE OVERLAP

No, what we are strongly objecting to is that the Transport Department in their wisdom has picked our street to erect the Tensioner Hub (overlaps); which will consist of Portals, Junctions, Gantries, Tensioners, Double Poles with cross Members, all set very closely together some 20 meters apart and others with 1 – 2 meters apart.  Made from huge steel beams,  7.5 meters tall and 350mm wide with lots of electrifications gadgets hanging from them.

NOT ROCKET SCIENCE IS IT?

These so called “Tensioner Hubs” (or overlaps) will then be erected all the way down the line to Adelaide at a distance of approximately 1.6 km.  So there are a lot more people all along the coast line who will be unfortunate enough to get one of these monstrosities outside their houses.  Our objective is to get these unsightly structures placed in a less obtrusive position wherever there is an alternative place suitable, as there is here some 100 meters away from the presently planned position.  We have enlisted several independent engineers who verify that the structure can be moved without any safety concerns or other issues.

STATE OF THE ART SUPPORT

And so the infrastructure started going up 10 minutes after the TV crew left and officials left, as the workers and trucks must have been sitting waiting in the wings.  So the “Big Cheeses” who after 6 weeks of us begging  finally came to our street, were only here to give us lip service in the most insincere way. 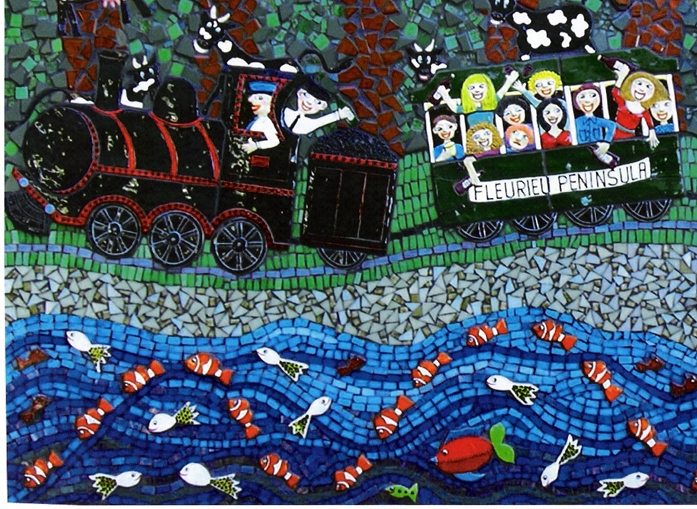 It did amuse me to see they had employed a few security guards to keep watch, one stationed outside our house and the other by the vehicle entrance.  Funny how frightening my threat must have been to the powers that be, to chain myself to the railway track.  We put up a sterling fight and Power to the People I say!

Here are a few of quotes I think fits perfectly here;

“It is dangerous to be right in matters on which the established authorities are wrong.”

“As long as the world shall last there will be wrongs, and if no man objected and no man rebelled, those wrongs would last forever.”

Till next time, when I should be back on track (pardon the pun) and telling you some happier stories, Happy Painting and Sculpting to you all.

Footnote:  I would really like to thank all of you involved in fighting this cause, you all did a fantastic job and everyone played their part and never wavered.  All spent hours researching railways, electrification systems, best practice, environment, the law and the like.  Countless meetings, protests and media calls and never mind all the hours of writing emails, letters and making phone calls. For a small group who really didn’t know each other before all this we did a fab job.  Thank you Bryan for getting us started and Richard for being the good cop against my bad cop (although I did like your analogy of me being the bull at the gate and you the limp squid too, lol:) Thank you Ursula, David, Susan, Denice, Keith, Jenny, Steven, Dot, Paul, Dawn, Nicky, Sam, Kai, Tonia, Jan, Graham, Nadine,Paul  and everyone else that helped.  You are all stars and at least we did get a slightly less offensive monstosity erected, well done!   Big Hug, Love Marie xxx

Why not come and have a look at Marie Jonsson-Harrison’sPAINTINGS FOR SALE, GICLEE PRINTS FOR SALE and SCULPTURES for sale orWALLBASED SCULPTURES.  Enjoy an original artwork on your walls or perhaps one on your bed ARTnBED.