Happy Hour or should I say NOT– as I tried writing this yesterday from poolside Happy Hour in Candi Dasa Bali,  but you know how things are you have a sip or two of a nice cocktail and all your cares fly away and any thoughts of what you should be doing suddenly doesn’t seem as important, lol.

This painting was the scenery from my goggles yesterday; we went snorkeling in Amed which is on the East coast of Bali far from the hustle and bustle of Kuta and the merchants peddling their wares haggling and bartering, traffic and tourists, never the less all very inspiring for an artist. 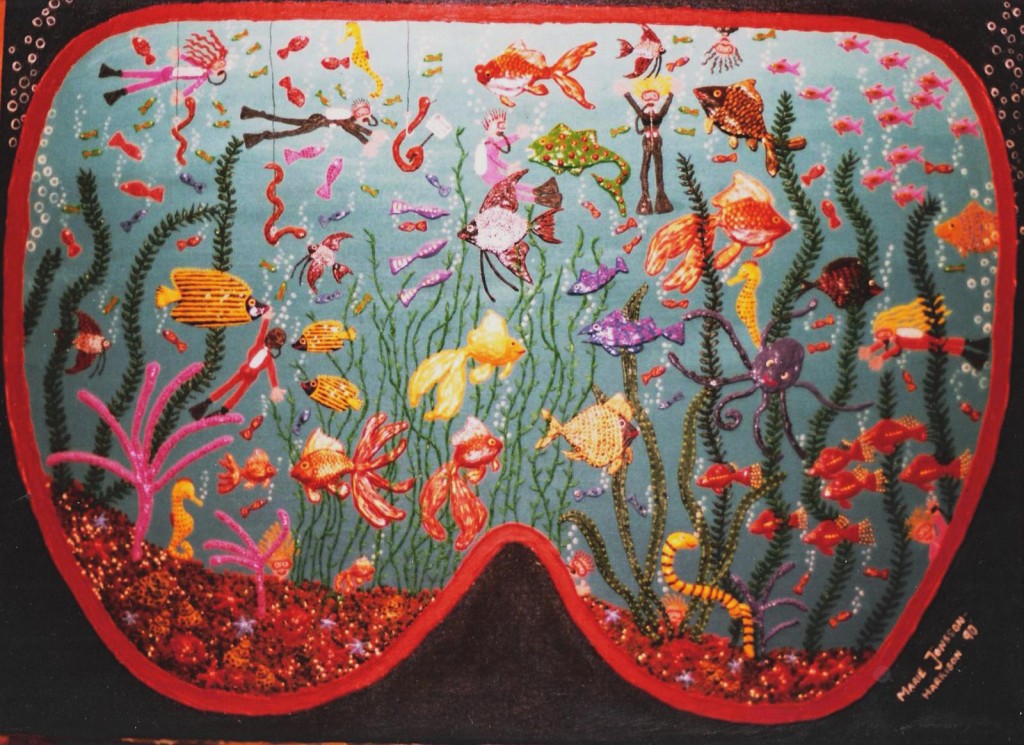 We had rather an eventful  time in Amed, what made me laugh firstly was that we were met on the beach by this very handsome and buff Indonesian man in a cowboy hat and wearing only budgie smugglers (small bathers,LOL) strutting up to us asking if we wanted to go out diving.

He was handsome so maybe snorkelling wasn’t the first thing on my mind!  Now for you people familiar with the movie starring Jennifer Aniston and Ben Stiller called “Along came Polly’, remember the scene on the beach where the very handsome French hunk asks Jennifer (Polly) ‘Anyone for Scuba’?

But you know the old saying “just because you are on a diet does not mean you can’t read the menu, right”, and that’s all I was doing, being a happily married woman and all! 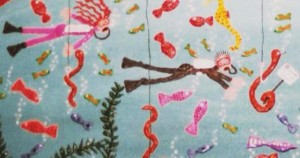 Anyway we had a little relax on some sun beds before summoning up the courage for the snorkelling (I am just a little bit scary cat when it comes to snorkelling) and probably rightly so as it turned out although Bryan tells me it is totally safe and I should not worry!

The underwater life is an totally amazing experience, it is really like being part of a Disney movie, we swam and saw this astonishingly rich underwater scenery with corals and fish in every colour of the rainbow and when I go home again I can feel another painting coming on. 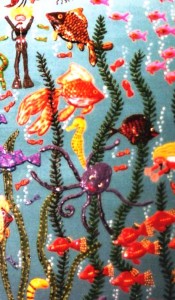 All of a sudden though, Bryan grabs hold of me and says he has just been stung on the face by some tentacles from a jellyfish  as he was unsure of the effects of this creature and thought we better head into shore, as it turned out it was not too bad apart from a little soreness and a red mark.

COLORS OF THE RAINBOW

So off we went again and this time we also saw an eel  slithering along that was bright yellow and blue and orange then I followed this little fish with perfectly iridescent  blue lips around his travels looking for things to eat totally fascinated by the world he lives in.

Bryan decided he had had enough while I was busy watching a rather long black and white sea snake doing lop the lops only centimeters away from me and after a while I thought I would head for shore too.

It wasn’t until I told Bryan of my adventure that I found out this was a particularly deadly kind of snake and maybe I should not have hang around so long to see what he was up too!

If you enjoy snorkling and paintings of underwater naive views here is another art blog for you 149 Art,Lifou and Sharks

So I think this quote by Charles Bukowski  (writer) fits perfectly here.

“The difference between a brave man and a coward is a coward thinks twice before jumping in the acage with a lion.  The brave man doesn’t know what a lion is.  He just thinks he does.”

Till next time happy painting and sculpting to you!