We’ve just had Chevy Chase here to stay, all the way from California via Sweden, without a word of a lie – see for yourself down below is the picture to prove it.  Well ok then maybe just a little untrue, but you have to admit he is a dead ringer for him, my cousin’s boy Kalle.  As delightful as it has been to have Kalle and his friend Kristoffer staying with us, it is Kalle’s father, my cousin Bjorn that I would like to tell you about. 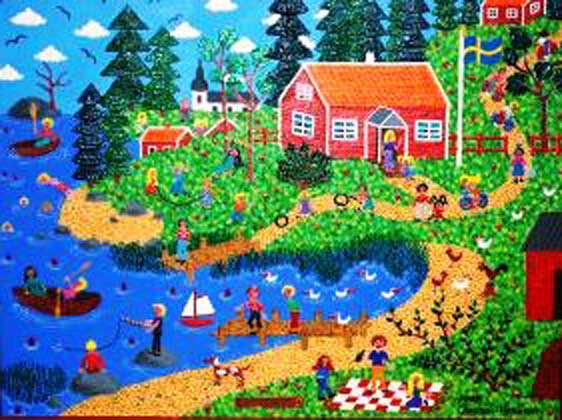 This acrylic painting was bought by his mother when I had an exhibition in Sweden and it pretty much depicts where Bjorn actually lives today, although when I painted it, their little red cottage in the woods by the sea did not even exists.  Perhaps I inspired him to build one, who knows.  Anyway Bjorn is in the corporate world of IBM and has pretty much traveled the world with his job, currently working mostly out of the UK.  But he calls the little red cottage and Sweden his home and goes there as much as time will allow. 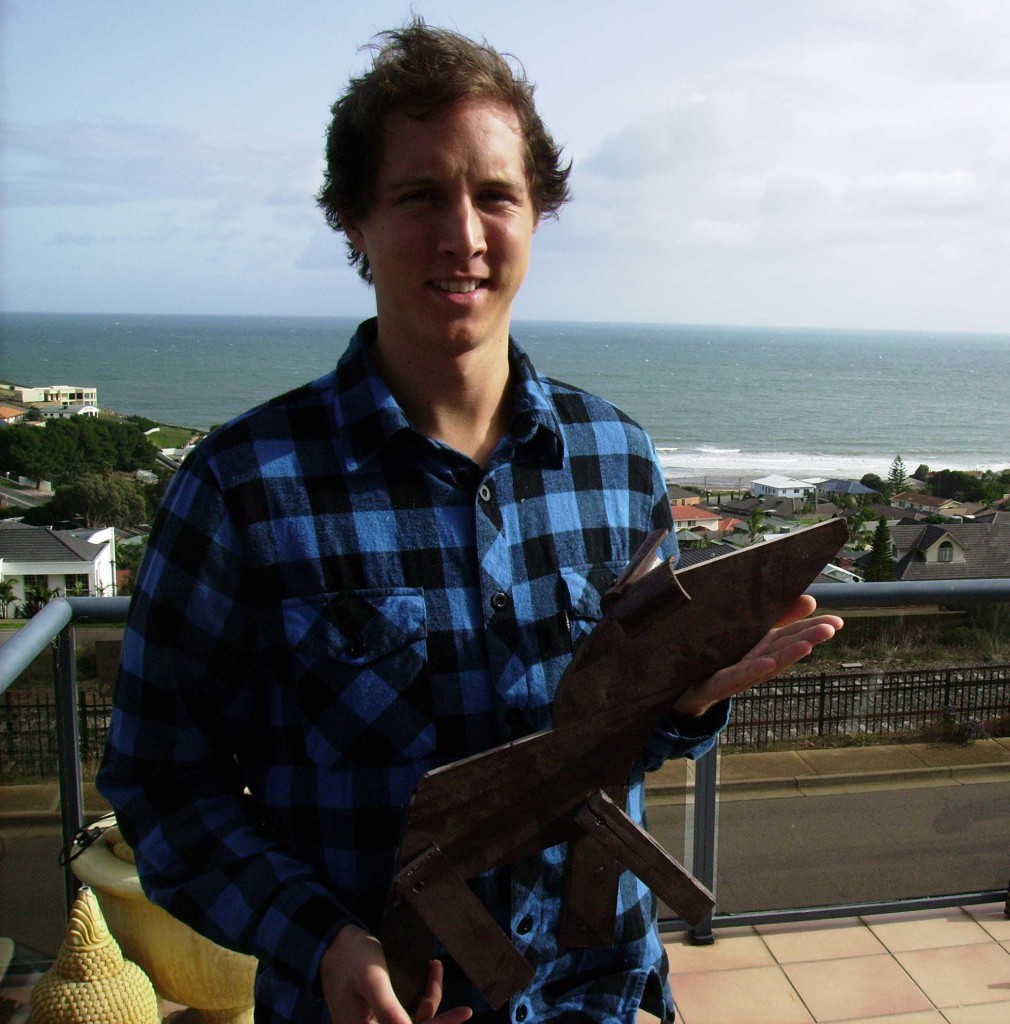 ROUND ABOUT DOGS SCULPTURE

You see that is where Rondellhund.com (Roundabout-dog) was born, in the shed at the back of the cottage.  It was in 2007 that Bjorn Andersson decided to combine his love of dogs and the tinkering in his shed by making some Roundabout dogs and giving the money raised to charity.  According to all that know him – Bjorn has a heart of gold and his vision is to keep Rondellhund at Philanthropic Street Art level and give a moment of enjoyment to all people traveling by car.  His dogs have traveled the world to places in the USA, Australia, UK & Germany to name just a few.

The first Rondellhund was actually made by Peter Nyberg and his intention was to “mock the state-employed artists, who get so much money to make sculptures that we can do just as well ourselves”  he said.  From what I understand, that was after there had been an official roundabout installation in Lindkoping by sculptor Stina Opitz, made in concrete.  This sculpture was vandalized and got some media coverage and shortly after anonymous people started placing little wooden dogs in roundabouts. (ref. Wikipedia)

The dogs Bjorn makes are of scrap pieces of wood and then painted in every way imaginable, with spots, stripes, checked, stars  & flowers.  He even made some for the Royal weddings between Sweden’s Crown princess Victoria and Daniel as well as the English Royals, Kate and William; with the crowns on their heads of course.   The idea is to sneak out in the middle of the night and place your dog sculpture in the middle of a roundabout or in some other public place to be enjoyed by as many people as possible.  Now lots of family groups come to the shed to help build & paint the dogs, and they are also available as flat packs (like Ikea) to send across the world.  The dog sculptures all have a tags on them, as quite often they go missing, and it is asked if they are “stolen” that some money is donated to charity and this seems to be the case too – nice honest thief’s lol.

So come onboard and make a dog yourself or sponsor someone else to make one.  So far the money raised has gone to a local dog rescue center, Starlight children’s foundation UK, Guide Dogs UK & many other charities.  You will find an easy instruction on how to make your own dog and see pictures from Rondellhund across the world on this link.  You can also join Rondellhund on Face book.

The quote for today comes from my cousin Bjorn who says on his website;

A few simple situation I wish for but I will never know ………..

When the family see a rondelhund in an roundabout they smile and stop to buy ice-cream.

When Steven see a rondellhund he smiles and call his mother to say how are you, I’ll stop by for coffee.

When Rosanne see a rondellhund she smiles and stops the car and hug her kids.

When Jane see a rondellhund she smiles and start thinking of new ideas for her class.

When Peter see a rondellhund he smiles and new music ideas start developing in his mind.

If you enjoyed this you may also like this art blog about my artist brother Matt Jonsson; 91 He ain’t heavy, he’s my brother