The day before Australia day, hubby comes in from the backyard and says “I think I just got bitten by a Redback, something crawled up my shorts and a minute later I saw the spider crawl away” With hubbys track record lately I was starting to fear for the “Family Jewels” lol.  For you familiar with my art blogs there has been a myriad of mishaps culminating in the heart attack scare, however in this case it was just a false alarm! 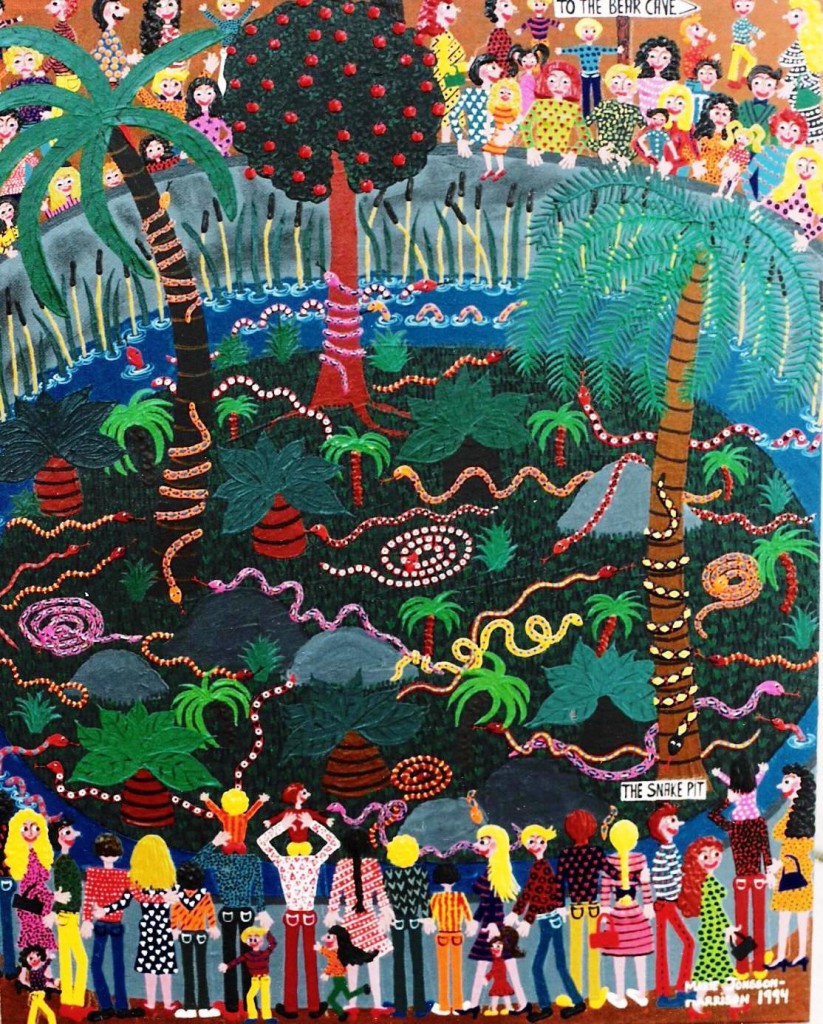 Redbacks and other creepy crawlies is something we have an abundance of here in Australia, although on this acrylic on board painting “The Snake Pit” snakes are shown in the zoo, in the everyday backyard there also lurks many dangers.  Something we take great delight with in scaring the wits out of any tourists that comes to stay, lol, well just a bit of teasing really.

Lets start with the Redback which is considered one of the most dangerous spiders in Australia and has a neurotoxin venom that causes severe pain.  There have been only 14 deaths recorded from the Redback spider bite which is quite low compared to the numbers of people that get bitten by them each year thought to be in the thousands.  Only about 20 percent of people bitten require hospital treatment and get the antivenin, after experiencing severe pain and swelling spreading from the site.  This can then lead to nausea, vomiting, abdominal and chest pain, headache, fever, tremors, coma, and of course death.

However spare a thought for the male spider as he is the one who almost never comes out of the sexual encounter alive!  The female who is much bigger than the male spider consumes the male spider in 2 out of 3 cases while the mating continues.  He is one of only 2 species of animals who actively assist the female in sexual cannibalism.  The advantage for the male spider is that he is able to copulate for a longer time whilst he is being eaten!!!  You men just don’t know when to stop!! LOL

THE ART OF THE ITCH

“Stop” being the operative word here as it brings me to my daughter’s boyfriend Brett and his itching, lol which I will tell you about in a minute.   We had actually decided in having a quite Australia day as we had done such a lot of partying in the weeks and days leading up to it.  However we quickly got into gear after Hillivi called to say she wanted to celebrate with us, much the same as Tim Allen and Jamie Lee Curtis from Christmas with the Kransks.

So they arrived fresh from the Chemist with a bag full of potions and lotions to try to sooth Brett’s feet.  He had managed to get a thousand little bites all over his feet which were suspected ant or sandflies bites and they were driving him crazy.  The poor boy could hardly concentrate on anything other than the itching and tried to discreetly itch them with anything he could find all the while being told off by Hillivi.  The conversation over the dinner table pretty much became a 3 way deal whilst Brett was alternating his attention between the itching or Googleing cures for his ailment on the Iphone.

Every now and then he would pipe up and say “Did you know they suggest smearing vegemite on the bites or maybe marmite” or “They say here I should pop them with a needle and put on some alcohol”.   So watch out all of you planning a trip down under and come prepared.

Here is a quote I think fits well here by Bill Vaughan;

“We hope that, when the insects take over the world, they will remember with gratitude how we took them along on all our picnics.”

Till next time happy painting and sculpting or perhaps itching?

If you enjoyed this art blog you may also enjoy this one also featuring my daughter and her boyfriend Brett also featuring more artworks of course ; 100 Some like it hot in Art