This acrylic on canvas board painting is called “Ice Skating in Central Park” and was inspired by our trip to New York a few years ago.  Here is the start of that story if you would like to recap in the paintings blog “I MISS NEW YORK”. 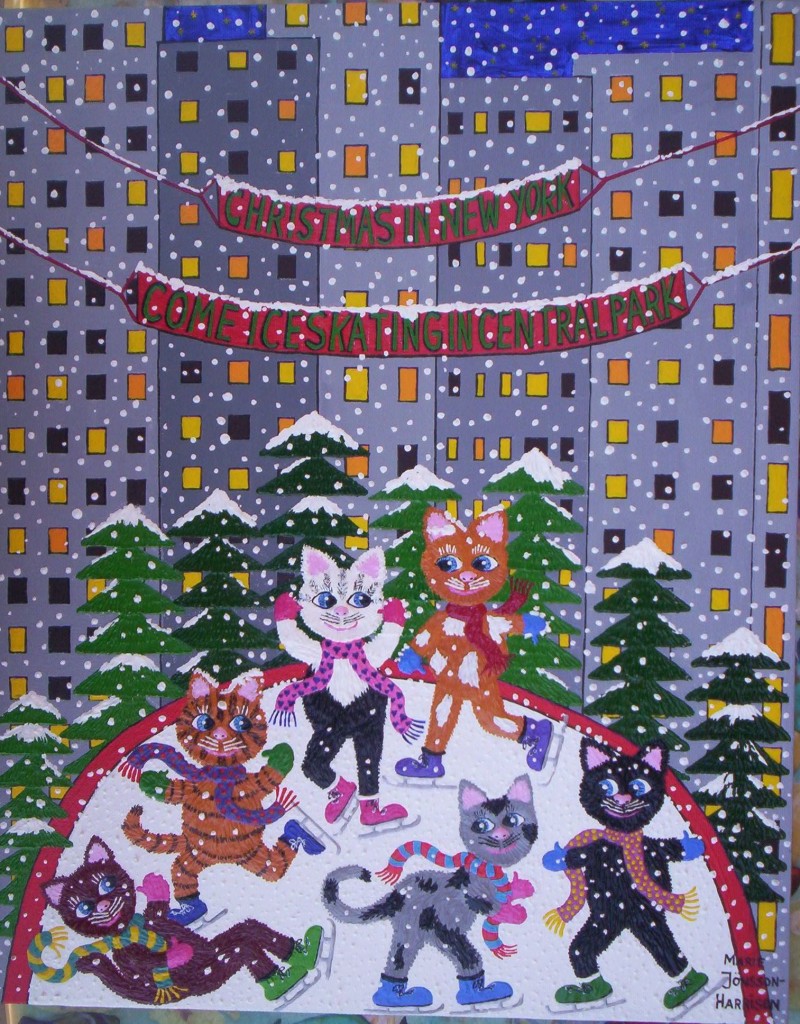 THE ART OF ICE-SKATING

We were in the mood for some ice skating and initially we went and had a look at the ice rink at the Rockefeller Centre but that was standing room only absolutely chockablock  full of people – not that we were planning for any laying down on the ice but you got to have some swing room right?

Perhaps that would have been the perfect place for me to skate as I have a bit of a history when it comes to ice skating.  Just to digress from New York for a moment my ice skating incident was in Melbourne some 10 or so years ago.

The kids and I had gone over there and stayed with friends and smarty pant “moi” thought I would show off a little bit.   I was born in Sweden after all and spent a lot of time skating as you do in a cold climate.  I had my own white skates when I was little and could do all the fancy spins and turns like a regular ice princess.  So I obviously thought that skating was just like riding a bike, never mind the decades that had passed in the meanwhile!

THE ART OF THE SHOW OFF

When we arrived there were some competition skaters practicing and I thought this would be my moment of glory to show off for the kids, so off I went and did my spins and turns like a prima ballerina and the kids were so impressed.  Oh mummy they said; “You are so good at it” and my head swelled even bigger as I copied the fancy turns of the practicing couple.  By now the kids accolades had completely gone to my head and I had thoughts of being asked to join a professional group for the winter Olympics or even a gold medal, the sky is the limit right?  I thought I would do some backward tricks next and that’s when I came undone – fell down HARD on my bum and broke my coccyx.

THE ART OF BEING A STAR

Yep that’s what happens when you get too big for your britches and think that you are a star; you land on your bum quick smart!

It was such a strange experience when I fell as suddenly even my hearing disappeared and it felt like I was enclosed in a glass case with the kids and all the other people outside, I could hear them talking to me and see them but all muffled and dreamlike.  Instead of glory I got 3 weeks of lying on a mattress watching telly instead, waiting for the pain to subside!  Note to self don’t be a show off!

So back to New York and this time the kids and I went skating in Central Park, to the same place where they filmed Serendipity, no showing off this time and we all stayed on our feet and afterwards enjoyed some hot chocolate.

I really wasn’t prepared for the size of Central Park, it is so big.  We were there during December so there was lots of snow on the ground and most of the trees had lost their leaves.  Another time it would be lovely to visit when it is all green too.  We also enjoyed a horse drawn carriage around the park which was lots of fun and of course reminded us of Kramer and Seinfeld.  Lots of images for artworks and Artworks blogs, how to fit in making all the sculptures and paintings?

Here is a Danish proverb I think fits here

Till next time happy painting and sculpting to you all and maybe skating,