THE ART OF HOLIDAYING

We set sail for Noumea after leaving Lifou and had a few cocktails on deck before the silver service dinner at the Waterfront restaurant.

Had we realized it was Island night and all that entailed we would have joined in the BBQ festivities up top deck as the ship was jumping that night – we later found out. 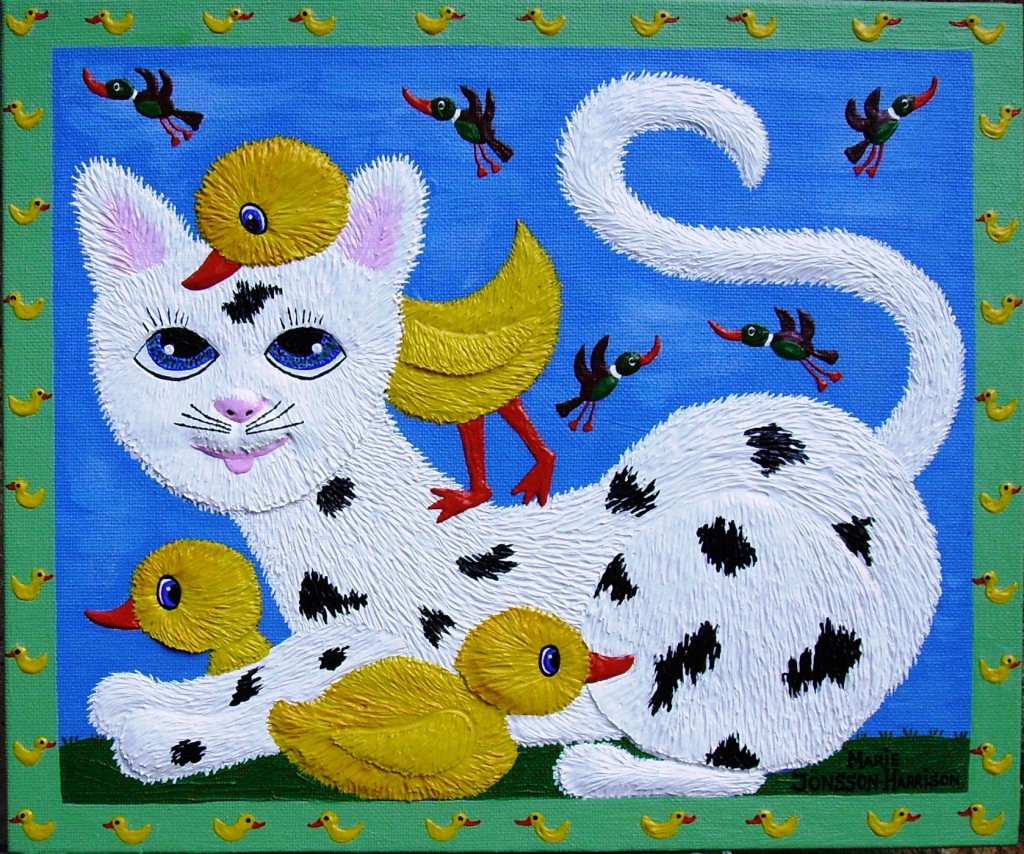 Acrylic on Canvas board baby ducks and cat!

If you like this acrylic Duck and Cat painting it is available as a free E-card on my website.  Also If you would like to recap on the previous stories of our big adventure, here is some links to my travel and art blogs; “LEAVING SYDNEY HARBOR” and  “CRUISING ON THE PACIFIC JEWEL” and “ART,LEONARDO DA VINCI AND THE ISLE OF PINES

THE ART OF THE PARTY

When we finally emerged from dinner the Island Deck Party was in full swing and as you would have it – it was only me the “party animal” that still had the stamina to boogie on down lol.  But with 5 others to consider and 4 of them half my age I tried to contain myself just for a change!!  Not easily done when you have ants in your pants and love to dance and party!

The music was pumping with Grooveline and the entertainment team got everybody grooving and the Pacific Cirque did a Circus de Solae act which was amazing.  A really spectacular Island Party, so just a hint for you cruise takers – read your daily newsletter and get to the party so worth it.

In the morning the ship entered the reefs of New Caledonia through the Havannah passage then through the Woodin Canal entering the Petit Rade and berthing at Quai Des Longs Couriers in Noumea.  From there we could walk of the ship no tenders required and found our way to a tour bus to explore the island, getting an all day hop on hop off bus ticket.

THE ART OF THE FRENCH PACIFIC

The travel brochure says “Noumea combines all the flavor and ambiance of a bustling, sophisticated provincial French town with the friendly charms, adventure and heavenly climate of the Pacific Islands”.  However I was surprised to see the western influence was much stronger than the Islanders.  I think I was more expecting a New Orleans feel with the French and colored mix, eclectic and exciting.   To me it felt a bit clinical or nouveau riche.

After a market visit and seeing the aquarium we decided to take a water taxi out to Canard Island (Duck Island) This tropical paradise is very small and intimate but had a lovely restaurant and a great reef for snorkelling.  As the day was the warmest to date even I decided to snorkel.

THE ART OF SNORKELING

Hillivi and Brett decided to just chill on the lazy-boys but that was quickly nipped in the bud when they were asked to pay up for the pleasure, at some astronomical rate of $10 dollars per hour per person to lay on a chair in the sun – should one wish to have a sun umbrella for some shade that would double the price!  Lol, so we were met by some rather grumpy faces when we finished the snorkeling.  Added to that we timed our departure from the Island a bit wrong as both the water taxi as well as the ‘you beaute’ hop on hop off bus must have been on “Island Time” as the promised 10 minute intervals was more like 40 minutes.

THE ART OF SPEAKING FRENCH

What impressed me no end on the bus was Hillivi’s normally reserved farmer boyfriend Brett suddenly starting to speak French to the bus driver as the rest of us were panicking when the bus took us in the opposite direction to the cruise ship.  (Not just a little bit of French but full on – could have knocked us over with a feather LOL.)

So it was a rather flustered 6 people who finally made it back to the cruise ship with 2 minutes to spare before cast off.  We were the lucky ones, one other couple missed the ship completely and they had to sail away without them, poor buggers, that would have spoiled the holiday!! I wonder what their excuse was.

Here is a quote I think fit well here by Kimberly Johnson,

“Never ruin an apology with an excuse.”