26.Looking for Lochy the painting

This painting “Looking for Lochy” was one I decided to do after seeing a doco on TV about a film crew who did just that, looked for Lochy the Lochness Monster in a submarine and I of course saw the whole image in front of me.  Although I do know that tropical fish could not survive the Scottish weather !!

I have never myself been to this part of the world, England was as far as I got however both my husband Bryan and son Kai has and their tales inspires me too. 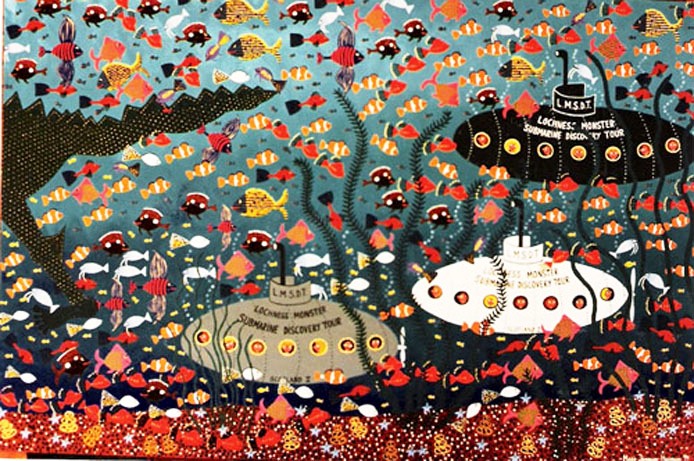 Looking for the Lochness Monster

Bryan went there in his backpacking days and tells of a beautiful country side and very very cold weather.

He and his mate stayed in a youth hostel which was in a castle on the banks of Loch Ness,  the caretaker met them there late one cold winters evening, unlocked the 25 bed dormitory and then promptly left them to it.

Two blokes alone in a rather spooky environment if you have been raised on the “Chain saw massacre” type of movies.

It was so cold that they took all the blankets of the other beds and lay under them like little pin heads, with just big eyes poking out waiting for the end to come.  In those days you could score yourself a youth hostel bed for just 5 bucks and a promise to do a chore in the morning such as clean a toilet or two.

This image is available as a Giclee print with  Union Art who welcome everybody who are interested in art and specialises in limited and open editions prints, photography, sculpture and original works of art.

I was more of a 5 star hotel kind of gal myself and our son falls somewhere in between the two and also visited Scotland recently; he loved this country too and started his Loch Ness tour by walking up the Royal Mile to the Edinburgh Castle where they caught the tour bus.

Now my son and his mate are two rather tall lads and had a hard time squeezing into the tour bus seats having to resort to sitting with their legs on an angle for the twelve hour round trip.   This would have looked rather demure if they had been wearing kilts, Kais mate has size 17 size feet which would not have helped either (shoes like small canoes on the end of his legs). 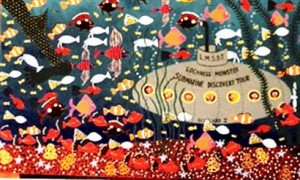 In any case they admired the sights from the bus and saw Hamish the highland cow, ( pronounced, Hooland Coo) who Kai said is quite famous for a fat hair covered hamburger having starred in a few movies.  Followed by the snowy mountains and the 3 lochs; Loch Lochy, Loch Linnhe and Loch Ness.  But neither of them did see Nessie that I had painted unfortunately, however Kai did take a lot of pictures so we could share in his travels and what made me laugh was this picture of The Wee Gift Shoppe, and Kais caption under it on FB ‘that this will make his mother laugh’. 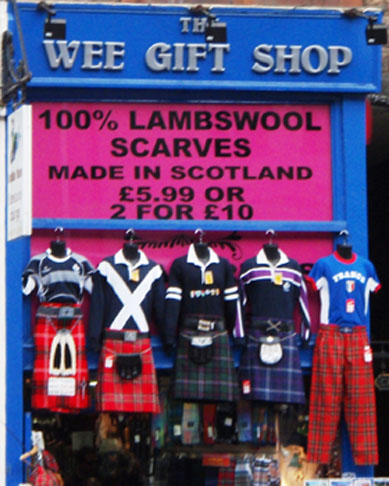 You know when kids are around 5 years old and they laugh uncontrollably at the smallest mention of wees and poohs, well that’s ME, I never did grow up and any joke to this day that refers to those bodily functions always cracks me up lol.

“He that lives upon hope dies farting”

Till next time happy painting and sculpting!