I had so much fun making this ceramic and mosaic artwork piece, firstly because I am a little piggy when it comes to food and just love to both eat and look at pictures of food and also it was fun to make the people all have open mouths with bits of broccoli and stuff poking out.  At least in my wall based sculpture I don’t have to worry about my table manners! 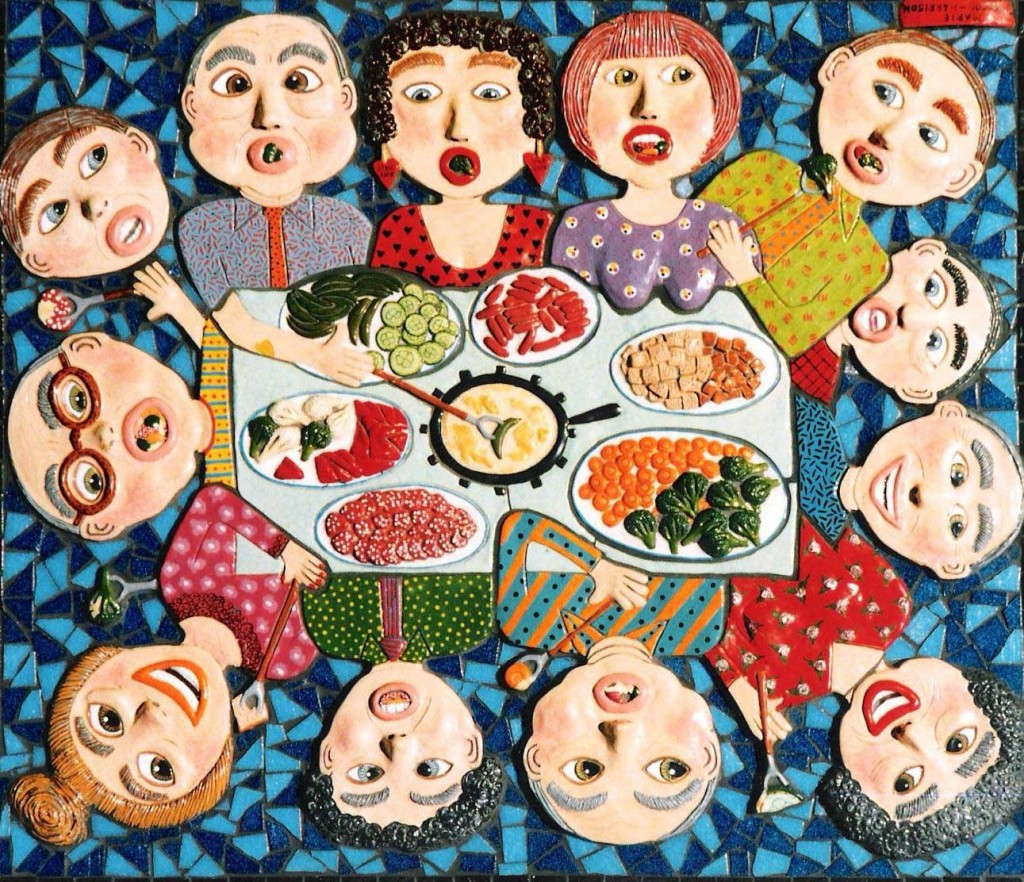 THE ART OF FONDUE

The fondue was such a lovely craze back in the 70’s when there would be Fondue parties held all the time.  However the history of the practice stems back to 1699 when it was firstly printed as a recipe in a cookbook (melted cheese cooked with wine to dip bread into.) As far as I understand Switzerland has always made wonderful cheeses but during the cold hard winter months of yesteryear the cheeses would dry out a little bit and since food was scarce and roads covered in snow they had to rely on a little imagination and voila the fondue were invented.    As early as 1875 it was already the Swiss National dish and then became popular in the United States in the 60’s & 70’s.

THE ART OF THE SWINGING SIXTIES

Perhaps why this dish became so popular in the rest of the world was because the Swiss had invented a little game as you sit and take your turn dipping the bread into the pot.  According to Hamlyn Press the publishers of The Fondue Cookbook it goes something like this:  If a woman drops a her bread into the pot she has to kiss all the men at the table, if a man drops the bread into the fondue pot, he has to buy a bottle of wine, and if either of them drops the bread for the second time, he or she must host the next fondue party.  So perhaps this was the start of the swinging 60’s and the Swingers party – it all started with cheese and not sex!

The imagination boggles, lol but it sure makes stale bread taste great – although us Swedes (as opposed to the Swiss) have another way of doing that.

Our contribution to the stale bread is Fattiga Riddare (Poor Knights is the translation although the Google translation says it is French toast) however this dish has more in common with pancakes.  As the stale bread is left overnight soaking in milk (you can also add egg and flour if you want) and then they are stirred like a pancake mixture and fried.  Served with jam and cream or whatever you fancy.

Problem with writing about food is its making me hungry so if you just pardon me for a minute – I will be right back with you after a little spell to the kitchen……. Back again …bugger I will have to restart that diet tomorrow again!

THE ART OF MULLED WINE

Another of my favorite dishes when I was living and modeling in Switzerland was the Raclett, which is yummy melted cheese served with a couple of small boiled potatoes, gherkins and pickled onions, could also include some meat (but being a vegetarian I would opt out on that bit).  I don’t know if I remember it so fondly because of the food ingredients or because it was usually served with Glue wine (gluhwein is spiced and mulled wine served hot) In Sweden we call it Glogg and we add some vodka or brandy to the recipe too, oh trust the Swedes, lol.

So here is how to make Gluhwein/Glogg

Start with a bottle of red

Assemble all in a saucepan. Heat it over a low flame and be careful not to let it boil, simmer for about 45 minutes then strain the bits out of it (or have fun picking cloves out of your teeth – well that’s not that bad as the raisins and almonds are delicious.)

Here is a quote by the wonderful artist Frida Kahlo

“I tried to drown my sorrows, but the bastards learned how to swim, and now I am overwhelmed by this decent and good feeling.”