Looking at this painting brings back so many memories from when the kids were little.  There is a four year age gap between our children Kai and Hillivi and were for the most part the best of friends growing up.  We lived on a farm until just recently and the nearest kids were 10 kilometers away so it was just as well that they enjoyed each other’s company. 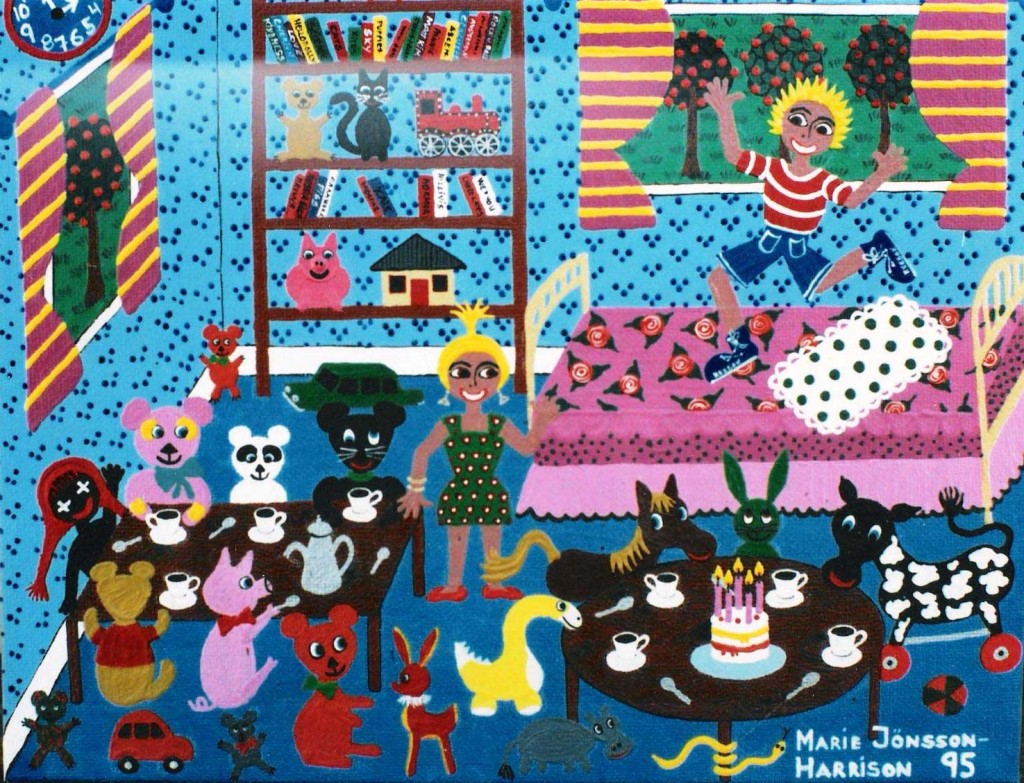 In this particular painting they are playing tea party which was a favorite game.  Another one was playing restaurant, they would have all their soft toys and dolls sitting around the tables and come in ever so official with notepad and pencil and inquire what everyone wanted to order for dinner (obviously the toys could talk, because they got busy writing it all down.)  My gallery in Japan had bought them this huge set of plastic food and a burger counter and they would spend hours making and serving the food.

I think though from the look of Kai bouncing on the bed he must have just come home from a friend’s birthday party!  You see we were rather careful on what we gave the kids to eat at home, healthy living and all that.  What we  found out the first time Kai as a little tacker came home from a party was that he was totally uncontrollable, he was literally bouncing of the walls, running from room to room like his pants was on fire and talking a million miles an hour.  With trial and error we found out that it was “red cordial” that affected him like that, so at least we knew that any time he went to a kids party he would come home all wild eyed and crazy.  (Weird too that any magazine or newspaper reports on the food colour issue during that time all said that food colors do not affect kids, where as the real life experience of a lot of parents are quite different.) 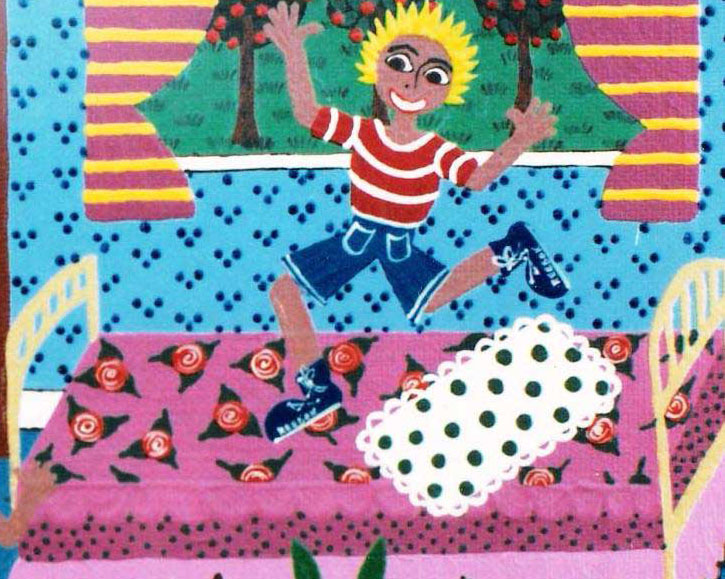 Little Miss Hillivi was not to be outdone however oh no, she would come home from every party and promptly chuck up!  The first time it happened I thought she had been food poisoned and rang the mother of her friend to warn her just in case it was affecting all the kids.  However as time went on we found out that every time Hillivi went to a kids party she would come home and throw up.  It took a little bit of investigating to find out that my sweet little baby girl would turn into the cookie monster when she arrived at any parties and stuff herself so full of snacks and lollies that her body could not cope with the overload, lol.

Another time on the way home from a Saturday outing which had included a cafeteria lunch in a furniture store (no not Ikea!) both Kai and Hillivi complained that they are not feeling well, so we had to stop the car.  They of course hang out the back doors of the car and say goodbye to; what looked like a “very yummy trifle” an hour ago and this time as there had been no overeating it must have been bad food. 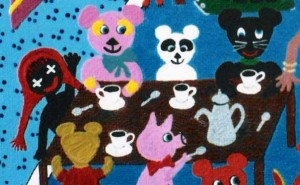 Try as I might – there was no chance of contacting the store on a weekend even though they were open both Saturday and Sunday.  The phone calls went straight to a recording and you couldn’t even leave a message – so I wonder how many other people got food poisoned that weekend, as there was a whole tray full of trifles there when we left the store.

Here are a couple of quotes that amused me on the “lovely” subject; the first by Johnny Depp;

“When the kids hit 1 year old, it’s like hanging out with a miniature drunk.  You have to hold onto them.  They bump into things.  They laugh and cry.  They urinate. They vomit”.

and the second one from the comedian and actor Jon Stewart:

“The night I turned twenty-two I drank a shot for every year.  I was so drunk. My friends drove me home and left me propped up on the couch holding a bucket.  I woke up with vomit all over me.  The bucket was clean as a whistle.” 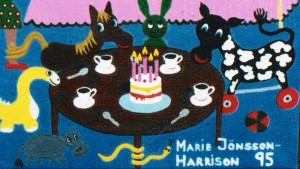 If you enjoyed this art blog and artwork you may want to read another here is a link about what comes out of the mouth of babes; 55. Art & The Rise and Fall of the Tooth