109 Stories behind the Wall – Public Sculpture

These images are from “The Centenary of Federation Gateway” sculpture which was commissioned by the Wakefield Regional Council and took some 18 months to complete.   It started as a seed planted by Dale Gathercole and grew into an amazing community project. 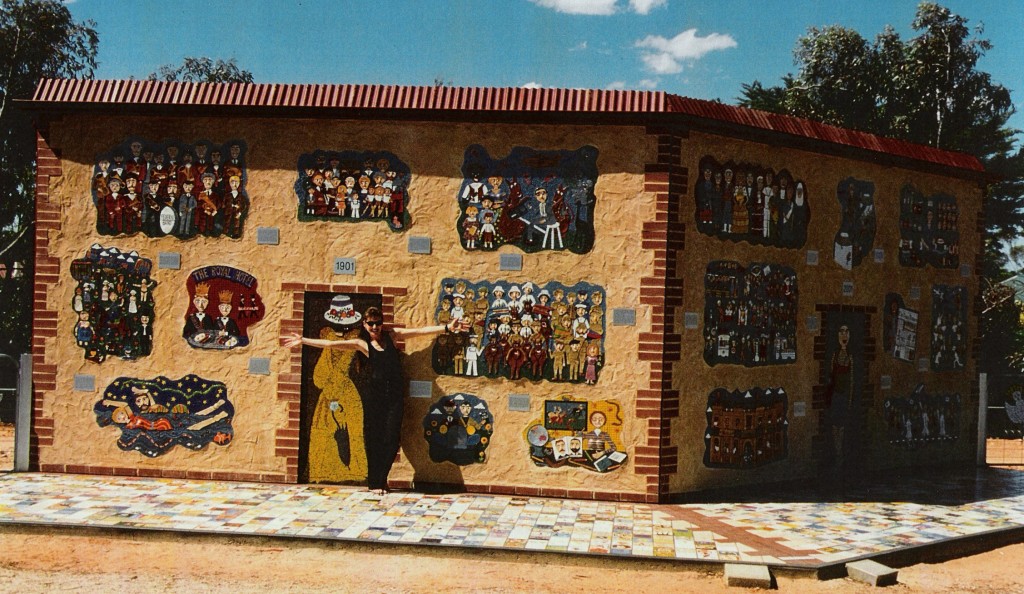 Prior to this I had been awarded a mentor-ship grant jointly by the Australia Council, Arts S.A. and the South Australian Arts Trust (Country Arts SA) in 1999 to pursue the idea of turning my colorful naive paintings into public sculptures.  My mentor was artist Andrew Stock and the idea was to explore the ideas surrounding the use of colorful mosaics and combining that with clay (ceramic) figures.

As the Centenary of Federation celebrations date was looming Dale, the Headmaster at Balaklava Primary School, thought it would be a great idea to mark that in some way in our community with a permanent landmark.    As a friend and a fan of my work, she had watched me transform my art from canvas to sculpture and approached me with the idea of doing a public sculpture.

This then led to letting my imagination soar and conceptualizing, developing and planning ideas whereby my husband Bryan’s knowledge as a former builder and draughtsman was invaluable.   Robert Veitch from the Wakefield Council was then approached and after presenting drafts, models and detailed budget requirements he whole heartily endorsed the idea and got the council behind it.  The project was also helped along the way by Dale’s tenacity of chasing grants, and as a result we received several grants by the Centenary of Federation Committee & Country Arts SA & Veterans Affairs as well as many hundreds of “in kind hours” generously donated by the whole town.

The sculpture was officially opened on the 23rd November 2001 by Neil Andrew MP, Member for Wakefield following a community celebration in Balaklava, South Australia.  The Centenary of Federation Gateway stands proudly as you enter into the township and is believed to be the largest Naive Sculpture in the Southern Hemisphere spanning 44 meters across.  The idea is that the whole sculpture looks like a Federation house, complete with roof and a veranda.  So in the center are two six meter by three and a half meter walls, located at 22.2 degree angle to each other which are rendered to look like sandstone with red brick quoins on the corners and around the doors.

One wall represents 1901 and the other 2001.  In the 1901 doorway we see the back of a life-size woman, made from hand-made ceramic tiles and mosaic, strutting through the door in all her finery, long dress, hat and umbrella in hand.  Through the 2001 doorway, she emerges as the modern woman, complete with short skirt, sunglasses and a mobile phone.  This reflects the changes that our society has undergone during the last 100 years.

The 1901 wall depict 9 separate stories and the 2001 wall tells another 8 stories of both ordinary and famous people who have connections with our district.  Their tales are told in pictures and words with my hand-made ceramic tiles surrounded by mosaic and the words by Dale which has been etched on aluminium plaques.  These are rendered into the wall to allow the sandstone to surround each story.   Dale who was the Project co-ordinator also compiled the book “Stories behind the wall” which was also launched on the same day by John Meier MP, Member for Goyder. (Which I have used to jog my memory on the events too!)

There are of course many stories to tell you about the making of this project and I will do that as time goes on I promise!  Use this link if you want to see some of my other Public Sculptures.

Here is a quote I like that fits well here by Daniella Kessler,