So I had the phone call this week that we all dread, a family member involved in a car accident.  But before I tell you about that let me set up the “back story”.

My brother Matt Jonsson a very talented artist in his own right and a former band member of the iconic Australian band Clowns of Decadence had just started work.  At the moment he is the head artist in charge of the sets for Cat Stevens upcoming musical “Moonshadow” which will soon be coming to the Princess Theatre in Melbourne, Australia.  The sets are designed by Cat or Yusuf as he is known by these days as he was a designer before his singer/songwriter career took off in the early seventies.

On the day in question my father was in his van en route to deliver some fruit in to my brother when suddenly the accident happened.   My father rear ended the car that suddenly came in front of him and the van proceeded out of control to the other side of the road.  His van was a right off and my darling dad was pinned by his leg in the wreck. 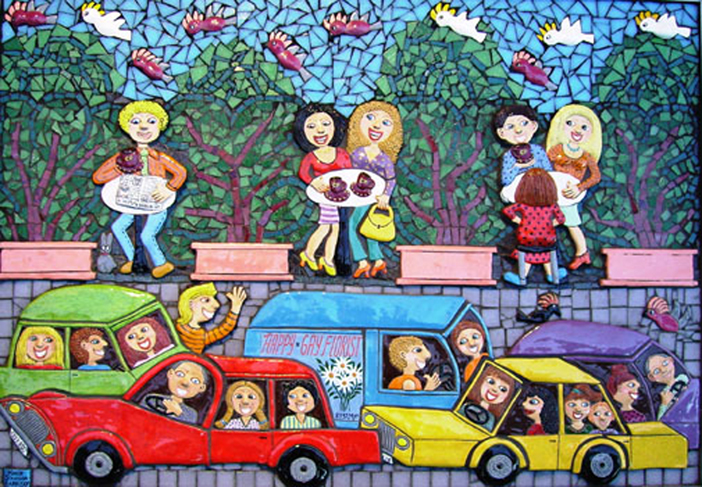 When my brother arrived at the accident scene he was confronted by 16 police, firemen and ambulance staff, police cars, one fire truck and two ambulances.  In the middle of all the commotion was my darling dad stuck and the firemen were cutting the van into two to try to remove him.

However the first things my father said to my brother was to get his fruit in the back of the van and that he is ok, his leg was numb by this stage and that my brother could go home because it would take a while to cut him out – as if!  I ask you who cares about fruit at a time like this!

So the phone call was from my brother who very gently said “Don’t worry sis, Dad is ok, but he has just been in a car crash and is pinned by the leg and the firemen are cutting him out as we speak”.  It goes without saying that I nearly collapsed right there and then.

THE ART OF KEEPING IT TOGETHER

My brother handled the situation admirably, made the appropriate calls, organized the tow truck and everything else and then went on to the hospital.

However as the story unfolded my brother said; “It appeared dad was ok from the start, if dad was bleeding or you had no idea if there was any internal damage or not then you would panic more thinking every second is vital in him getting to hospital, but when dad is more concerned about getting me to take my fruit out of the van that he was going to deliver then you have to ask yourself is he in shock or is he still your normal crazy caring loving dad. “

Now that typifies my dad, never concerned for himself but always caring how his kids and grandkids are, just one of the lovelies men you could ever meet.  My dad was home from hospital after a few hours with just a bandaid on his leg and a few bruises, lucky him and lucky us.

Matt made it back to work on the Cat Stevens “Moonshadow” set and that connection makes the full circle for me as many “moons” ago when I was modelling in Europe I had dinner with the manager of Cat Stevens in Chelsea, London.  We were having a Whisky Sour and he was bemoaning the fact that his very successful and famous client had decided to give it all away – change his name to Yusuf Islam and become a Muslim and drop out of the fame game.  At the time I nearly cried too, who can forget Tea for the Tillerman and the very poignant song “Cats in the Cradle” which has shaped my own way of raising my kids.

So I leave you then with those wonderful lyrics written by Harry Chapin (the song was based upon a poem written by Harry’s wife Sandy) which my parents kept in mind when they raised me and I in turn did the same with my kids.  So thank you Cat, Harry & Sandy, you shaped several generations!

My child arrived just the other day
He came to the world in the usual way
But there were planes to catch and bills to pay
He learned to walk while I was away
And he was talkin’ ‘fore I knew it, and as he grew
He’d say “I’m gonna be like you dad
You know I’m gonna be like you”
And the cat’s in the cradle and the silver spoon
Little boy blue and the man on the moon
When you comin’ home dad?
I don’t know when, but we’ll get together then son
You know we’ll have a good time then

Well, he came home from college just the other day
So much like a man I just had to say
“Son, I’m proud of you, can you sit for a while?”
He shook his head and said with a smile
“What I’d really like, Dad, is to borrow the car keys
See you later, can I have them please?”

Till Next time happy painting and sculpting and maybe singing,

If you enjoyed this art blog you may enjoy this on also with music connection; 111. Indie music, Art and Paintings with James Abberley I’ll be a Bird