This painting was such a delight for me to paint with the blue, blue sea in front of our house and the sailing boats for inspiration, added to some photographs of the beach area  locally and then my imagination did the rest.  Obviously it is a really windy day and the title of this painting is “Holdfast at Holdfast” as Holdfast Bay is the council area that takes in the beach suburbs from Kingston Park to Glenelg. 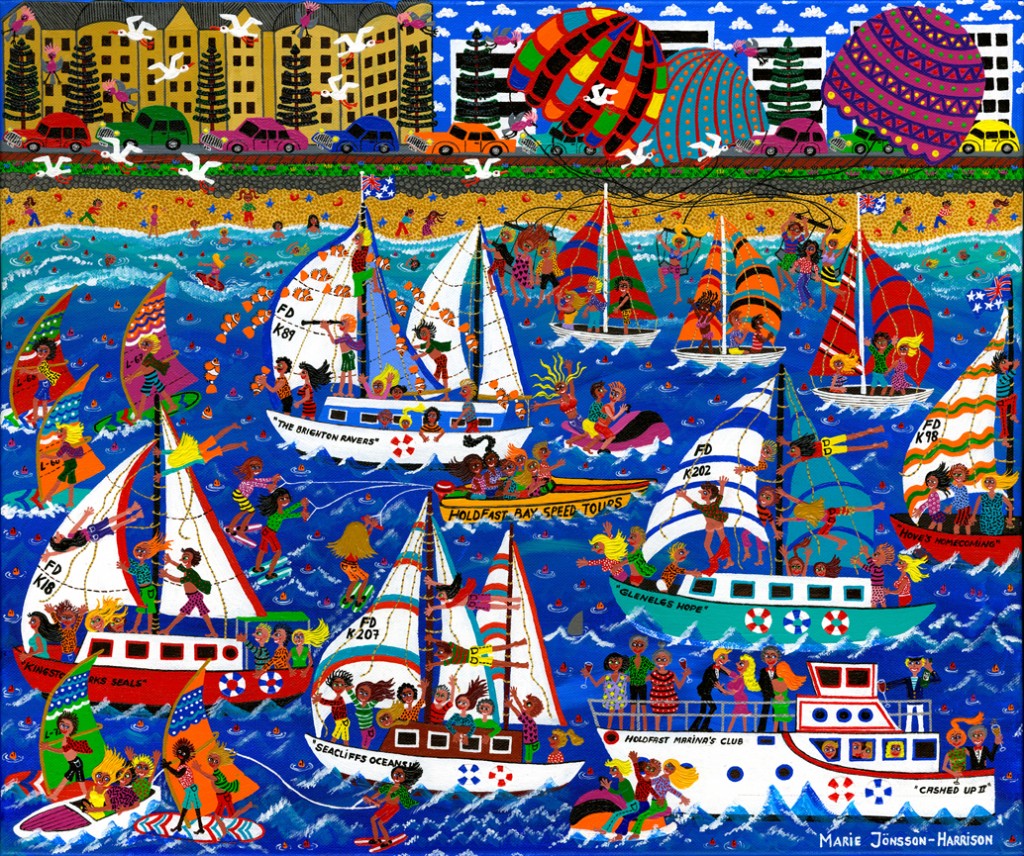 Now it will be part of an exhibition organized by the Holdfast Bay Discovery Centre in Mosley Square, Adelaide, South Australia which opens this coming week and will continue until March 2014 called the Bathing Box Project and the Sea Change exhibition.

Some of the other artists taking part are Jim Kinch, Margo Miles, Cat Leonard, Tim O’Shea, John Hamilton and a couple of artists still in school Macy Newman and Anna Foley who already shows great talent.

This ART exhibition celebrates the local beach environment and that summertime feel and the launch will include the reprint of the book produced by the CHB History Centre titled Sea Change as well as the opening of the Bathing Box Project.  Which is a bathing box from yesteryear that has been lovingly been reassembled on site and features vintage bathing costumes and paraphernalia and beach shades.  You are invited to dip your toes into this snapshot of seaside life from the 1900 to the 1960 for the price of a gold coin donation.

Bathing Boxes, beach cabins or beach huts as they are often referred to are a small often brightly coloured wooden box which featured on the beaches in Australia an idea the settlers took with them from England originally.  These beach huts can be privately owned or owned by the local council.  The privately owned beach boxes can sell for an amazing amount of money and in Melbourne they are priced between $60,000 to $210,000 dollars.  However take a couple of hours drive from there to Portsea and the bathing boxes the size of a small garden shed will set you back nearly $600,000.  The same sort of money needed to buy 2 modest houses in the outer Adelaide suburbs!

That’s a lot of money to pay for what is essentially just somewhere to change into and out of your swimming cossie, perhaps spend a little time sheltering from the sun, wind or rain and also storing your belongings whilst you cool down in the sea.    Some people have more money than sense I think!

THE ART OF MORALITY

The bathing boxes in Brighton, one of the seaside suburbs in Melbourne famous for them, are known to have been there since 1862.  They originally were constructed to preserve the modesty during the Queen Victorian period.  Just recently in 2003 the Queens beach hut in Norfolk was destroyed by fire, this building had been in the Royal Family for over 70 years.

Also recently the British “bad girl” artist Tracey Emin sold her Whitstable beach hut to ART collector Charles Saatchi (Nigella Lawson’s husband) unfortunately this hut was later destroyed when a fire broke out in the warehouse where it was stored.   Tracey is a very interesting and confrontational artist, part of the group known as the Britartist or YBAs (Young British Artists) she has used a lot of different mediums in her art as well as tried many art forms such as painting, photography, fabrics, bronze sculpture, neon, monoprints and found objects but is probably most known for her installations.  The most talked about is “My Bed”, an installation consisting of her own unmade dirty bed featuring stained bed sheets, used condoms, empty cigarette packets, dirty knickers – this was also bought by Charles Saatchi for the Saatchi  Art Collection as were her famous “tent” called “Everyone I Have Ever Slept With 1963-1995” which was a blue tent where the names of everyone she had ever slept with were appliqued all over it (this work also perished in the Saatchi warehouse fire).  So her artwork is always controversial and challenging and Tracey is collected by many well known stars such as George Michael, Ronnie Woods, Madonna, Elton John and models Kate Moss, Jerry Hall and Naomi Campbell to name a few.

SELF PORTRAITS AND BATHING BOXES

I can assure you though that the bathing box on show here in Glenelg is tame by comparison but certainly worth a look and reminisce about times gone by.

Till next time happy painting, sculpting or just reminiscing!