ART IN THE SPA

So you know the drill, you have a special occasion coming up, something romantic like an anniversary maybe, lol and you want to celebrate in style and make it special.  Well that’s what we have done with nearly all of our wedding anniversaries, bar a few when the kids were little and we could not bear to leave them or money was short.

(In this painting “Rub a dub dub, there is a woman in my tub!” I was having a somewhat better time that what evolved, oh and there seems to be some Romeo peeking in too, I’m sure that’s not Bryan.) 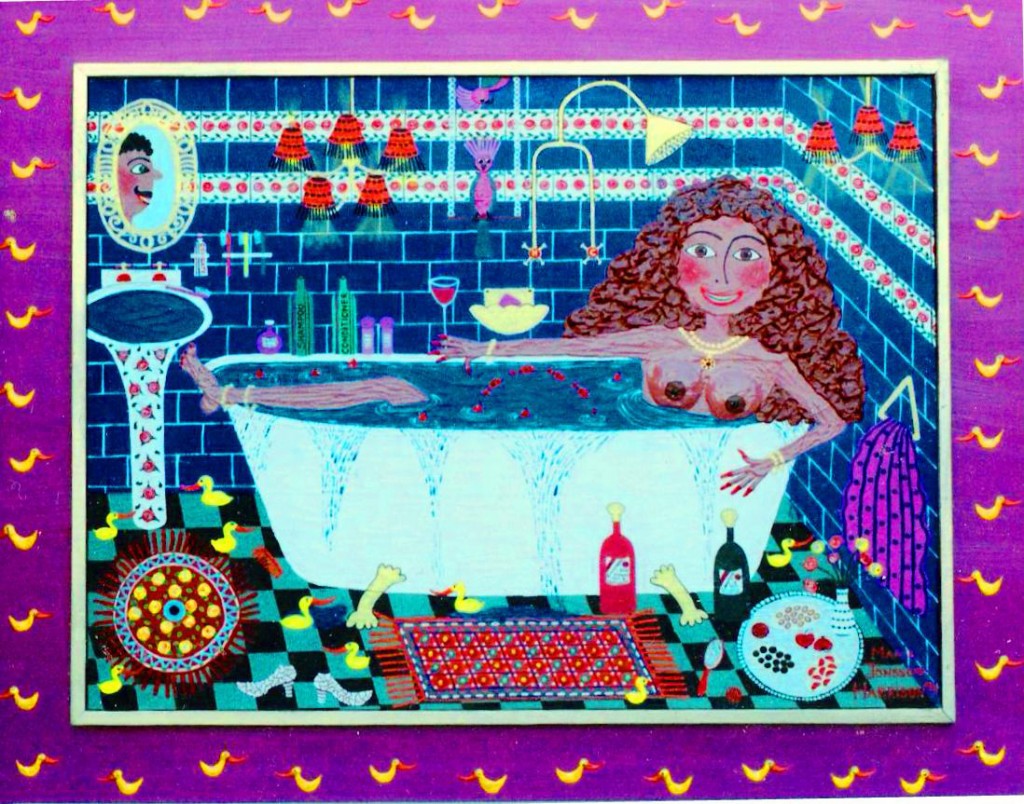 Rubba dub dub there is a woman in my tub!

Otherwise a night or two in a fancy hotel is in order, room service, champagne, best bottle of red we can afford, romantic dinner by candlelight, room with a view and a spa of course.  Now as it happened this year we had just had 2 weeks with all of the above in Bali and then come home to a very very hectic move into the new house and we thought mmm… new house, kids away for the weekend, let’s just stay home- we now have the view, 2 spas to choose from, hubby had bought ingredients for a lovely dinner set the table with candle lights etc., everything was planned.

So it should have been perfect then right?  WRONG  – Silly us – instead of taking the day off, we decided that we would each work until 3pm when we would meet on the patio for drinks and nibbles.

You see with the new house and all and it’s renovation time, the laundry needed an overhaul, so hubby is busy doing that whilst I am in the art studio.

Both of us tearing our hair out as it happens, as everything that could go wrong did go wrong!  At hubby’s end the newly bought cupboards are the too small, shelves are for a pantry and not a laundry, wrong hoses and fittings that doesn’t match and to top that off he drops the bench top on his leg and at first thinks it’s broken (lucky it is not but looks nasty). Oh and the new tiles are the wrong shade of white and will have to be returned. 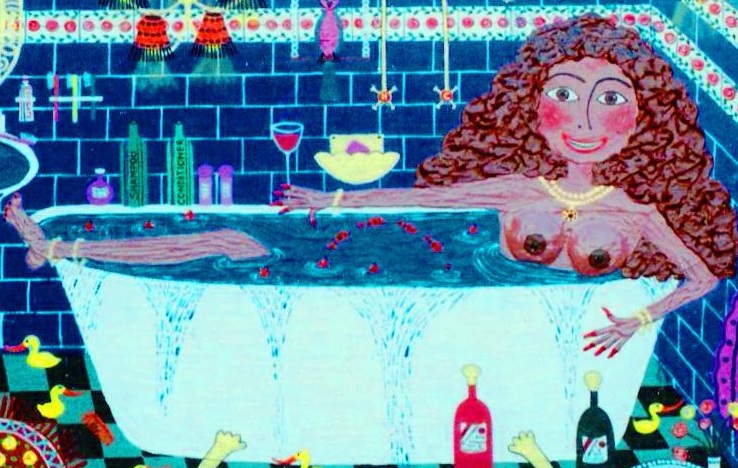 In the studio I am fearing no better, I have just received a $400 dollar cheque for a painting which should have sold for $1500!  So I am trying to find out what went wrong there, is the mistake our end or gallery end?  Then the emails decide that they won’t send, not even one email, they just go into cyberspace somewhere.  Where do all this emails go anyway- is there some sort of catchment area for stray emails?  I cannot reach anyone by phone either as our new number is playing up, topped up with the iphone that now is refusing to send messages too!  Oh and did I forget to tell you the ART website was having issues too!

So there were two cranky people that met up not at 3pm but by now 5pm for a bottle of Champagne!   Ok so hubby has now got the spa going and has lined the entire bathroom with candle lights, very romantic.

He goes off and checks the water level and adds a bit more bubbles to the water and then rather sheepishly calls for me to join him.

Well you should have seen it – he had somehow upended the bottle of soapsuds and now we had a ‘white soapsud monster’ growing in the spa, it grew and grew and covered half way up the walls and put all the candles out, filled up the wineglasses and then proceeded to travel over the spa itself till the whole bathroom was covered.  Well as if that was not enough, why should that be enough I ask you- let’s bring it on! – and it did, because now the ‘white soapsud monster’ was starting to travel down the carpet covered hallway, as I am alternatively laughing and screaming at hubby to hop out of the spa and help me save the carpet and furniture!  You get the picture!

I know now why he did nothing to help as by the time I finally hopped into the spa I understood entirely- the temperature of the spa was that hot-you actually cooked upon getting in and any rational thoughts, never mind the romantic ones simply vanished! 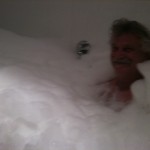 So in the end when the water cooled down a bit I ended up having a lovely spa with our two dogs, whilst hubby called the local Indian take away delivery service, as by this stage it was really late and he was not in the mood to cook.  We did finally have a rather nice night, exchanged presents, laughed and said let’s just get DRUNK!

“He who does not like wine, song, and wife, Remains a fool for the whole of his life.”