This painting is of my brother Matt’s band Clowns of Decadence, they all came from the Northern suburbs of Adelaide South Australia and the music grew out of the punk genre and they became a very well known pub band during the early 80’s and 90’s touring around Australia and also New Zealand.

Clowns of Decadence & My brother Matt Jonsson, the drummer

A very Arty band of course due in part to my brothers influence. The Clowns of Decadence ensemble was large scale which also included fire eaters and other various artistic acts in its repertoire.

Matt Jonsson was the drummer and in charge of designs of backdrops and album covers and other visual influences, however all the band members were all very creative and talented and they made a fantastic team.

They still have a fan group on Face book all these years later.  So this painting was obviously a lot of fun to create. 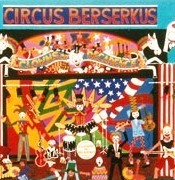 This particular night was at the Entertainment Centre in Adelaide where they had a live cross to Hey Hey It’s Saturday, (television show) and an interview by Molly Meldrum.

There was another 3 bands I think performing that night as well. I went there with Bryan (husband) and met my mum and dad in the car park.

What made me laugh was that my darling mother had been to a Melbourne cup luncheon recently and had made herself a rather unusual hat. My mum is very good at sewing and not afraid of standing out in the crowd even though at this stage she was in her 60’s.   You can spot her in the left hand corner with the rather tall top hat with a horse on it, a real artwork.

My Dad was mortified and tried to talk her out of this hat before we went in,  but mother would not be convinced of otherwise.  She was going to wear this hat come hell or high water to her son’s concert.

I must say I applaud her courage.  It is a fantastic thing to be and individual and proud of it and most probably some of my getting out on a limb also comes from mum, although most people say the artistic side is from my father’s side but I think it’s a bit of both. So the man with the beard is my father and then there is my husband and me dancing next to them.

Check out the action under the sound guys table.

What a wonderful night.

From the wit and wisdom of Oscar Wilde here is another saying that I like,

“All women are like their mothers.  That is their tragedy.

Hope you come and visit me soon again till then happy painting and sculpting everyone!