113 Art & Swedish Traditions, Another weird one

One thing I really miss about living in Australia is the Sankta Lucia tradition, and yes I know some of you are going – What’s that?  This acrylic painting should help to paint the picture for you.  (Although something awful must have happened to the girl on the very right of the picture, don’t know what that is on her face!) 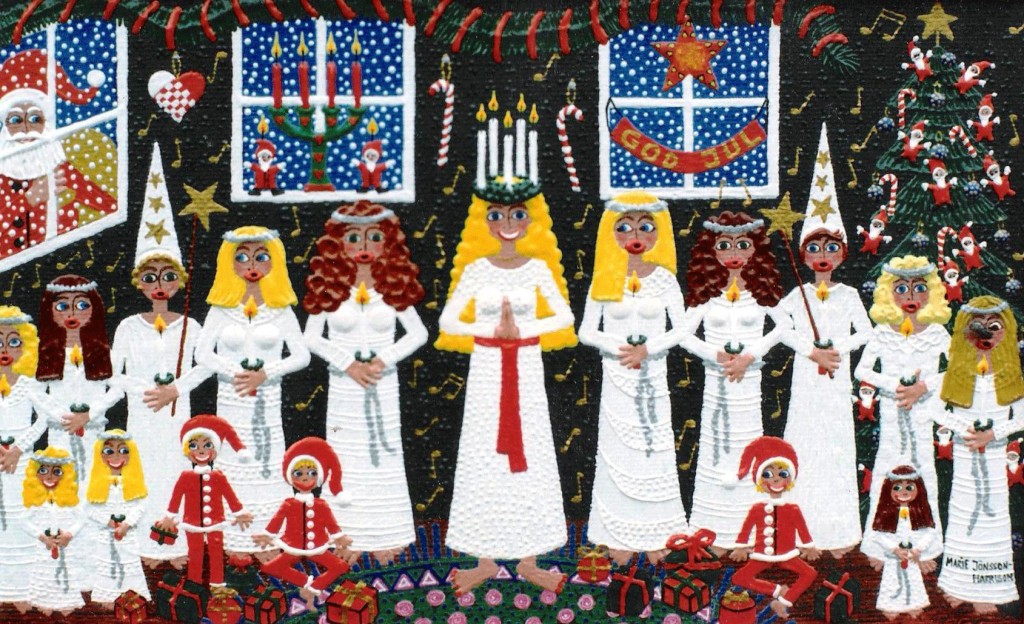 THE ART OF THE SWEDISH MAIDEN

Sankta Lucia is like a shining angel coming to the Swedish darkness all dressed in white and has a wreath of candles burning on her head.  It is celebrated on the 13th of December which is the longest night of the year.  Even though the celebration takes the name of the Italian Saint Lucia from the 4th Century, I’m led to believe that it is really named after the Swedish maiden that appeared on the shore of one of the big lakes and proceeded to give out food to the starving masses during one of the famines.  She is said to have worn a crown or wreath of lit candles – well it was dark wasn’t it and since battery operated torches was not invented yet, what else could a resourceful girl do?

THE ART OF GETTING CHOSEN

When I lived in Sweden it was every girls dream to be crowned the new Lucia and the crown always went to the prettiest girl with the long blond hair.  She would lead the procession dressed in a long white gown and have a bright red sash around her waist and of course the wreath with candles all alight in her hair.  The rest of us could be Tarnor, and we would also be wearing white although our wreath was somewhat smaller and made out of silver tinsel (always the bridesmaid never the bride, lol) Not to be outdone the boys would also join us, some dressed in the long white gown too with a long white pointed hat (LOL actually the hat would look like one of those dunce hats you wear in the naughty corner) although it was decorated with stars and the boys were called sjarngossar – starboys!  A couple of boys would also be Santa’s little helpers dressed in red.

My Aunty (father’s sister) Gun Jonsson was actually crowned the Swedish Lucia in Stockholm many years ago Miss Lucia 1947 – part of her prize package was a life time supply of Palmolive soap!  Gun went on to become firstly a dancer in an international dance troupe called “The Cassel Girls “and later became a famous actress.  She was in several plays directed by Ingmar Bergman and Gun is also a much admired director and producer, something which she still does today.  (‘Bad Javlarna’,’ Hem till Byn’ and ‘Sova rav’ are just some of her Swedish movies and TV shows, you Swedes know what I am talking about.)

Of course we would all be singing Christmas carols but the song we started and finished with would be this one.

The night goes with heavy steps
around farm and cottage;
round the earth the sun has forsaken,
the shadows are brooding.
There in our darkened house,
stands with lighted candles
Saint Lucia, Saint Lucia.

The night passes, large and mute
now one hears wings
in every silent room
whispers as if from wings.
See, on our threshold stands
white-clad with candles in her hair
Saint Lucia, Saint Lucia.

The darkness shall soon depart
from the earth’s valleys
then she speaks
a wonderful word to us.
The day shall be born anew
Rising from the rosy sky.
Saint Lucia, Saint Lucia.

(Translated: by Chris Troy and based on an article by Elizabeth Dacey-Fondelius)

THE ART OF BAKING

When my own kids were little we would go to the Swedish Church in Adelaide and they would take part in the procession followed by coffee and cakes.  Traditional Lussekattor  (cats) which are baked buns made from saffron, so they were slightly orange colour and with raisins for their eyes, as well as lots of other Swedish biscuits mmmm…. makes me hungry just to think about it.

Then Father Christmas would turn up with presents for all the little kids (which their own parents would have bought and wrapped and put in the sack).

I will never forget when my son Kai was just a little baby and we were attending his very first Lucia celebration.  He had been enjoying seeing all the lights and singing and even did not mind being presented to Santa, however when Kai with a bit of help from me unwrapped his present, the poor little boy screamed blue murder and got the fright of his life.

His stupid mother “moi” had bought him a Jack-in-the-box and it scared him half to death.  To add injury to the insult I had paid good money for this toy bought at David Jones and he never ever played or even wanted to look at it again. LOL, not that I blame the poor boy!

Here is a quote by Franklin P. Jones which I think fits well in here;

“Children are unpredictable.  You never know what inconsistency they’re going to catch you in next.”

Till next time happy painting and sculpting and baking to you all,

Here are some links to stories about 2. SWEDISH EASTER & Art or Swedish Christmas and Swedish Smorgasbord. Enjoy!